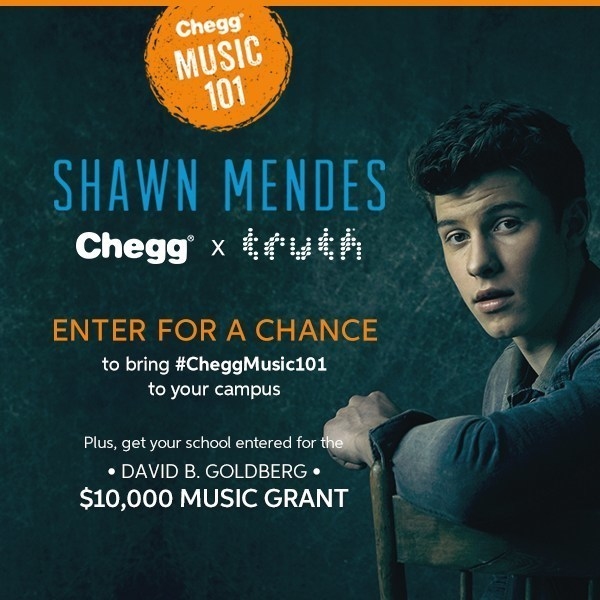 Chegg, the Student Hub, in partnership with truth, one of the largest and most successful national youth tobacco prevention campaigns, today announced that one U.S. college or high school campus can win a once-in-a-lifetime visit from multi-platinum singer-songwriter & pop sensation, Shawn Mendes. Beginning today, high school and college students can vote for their school to win this on-campus experience through an online contest. The singer-songwriter will take over the classroom with a look into his unconventional rise to fame as an artist gone viral, as well as host an exclusive Q&A with students and perform a few of his biggest hits.

After becoming one of the world’s most-followed musicians online, singer/songwriter Shawn Mendes was discovered by artist manager Andrew Gertler and signed to Island Records; his first single, “Life Of The Party,” broke records, topping the iTunes Charts and selling over 150,000 copies in its first week. His debut album Handwritten debuted at #1 on the Billboard 200 chart and includes the quadruple-platinum smash “Stitches,” and certified platinum singles “Something Big” and “I Know What You Did Last Summer.” Mendes was named as one of Time Magazine’s “Most Influential Teens” of 2014 and 2015, as well as one of Forbes’ “30 Under 30” in 2016, and he won “Favorite New Artist” at the 2016 People’s Choice Awards. Shawn’s sophomore album Illuminate will be released September 23rd. Debut single “Treat You Better” debuted at #1 immediately upon release via iTunes in 26 countries, and Shawn performed the song on the TODAY Show Summer Concert Series as well as on The Tonight Show Starring Jimmy Fallon. Shawn is currently on a sold-out headlining world tour, including shows at LA’s Greek Theatre and NYC’s Radio City Music Hall and Madison Square Garden, as well as his hometown Air Canada Centre.

To celebrate the importance of arts in education, Chegg will also award the winning school a $10,000 grant for their music department from Chegg’s David B. Goldberg Music Scholarship fund.

“We’re so excited to work with Chegg & truth on this campaign. It’s so important to us to help foster the role that music plays in education, and we are so thrilled to be able to bring Shawn to a winning school to help that cause,” said Andrew Gertler, Manager to Shawn Mendes & Founder of AG Artists.

Students attending high school or college in the contiguous 48 states can begin nominating their campus today for a chance to win the experience. To do so, students simply visit chegg.com/play/Shawn, log in to Chegg, and vote for their school. The school with the most student votes will win the visit from Shawn Mendes. Students can also earn additional votes by downloading Shawn’s single, “Treat You Better,” watching a video from truth, or downloading the Chegg app if they vote for a college or signing up for Chegg Test Prep if they vote for a high school. The classroom-takeover will take place by December 31st 2016.

“More than 94 percent of smokers start before age 20, which is why it’s so important for us to work with partners like Chegg,” said Eric Asche, Chief Marketing Officer, Truth Initiative, the organization that funds and directs truth. “While tobacco is still the leading cause of preventable death in the U.S., only 7 percent of teens smoke.  That makes ending the death and disease that comes from smoking a realistic goal.  We won’t get there alone, we need students to bring their passion, creativity and social influence to help us #FinishIt for good.”

This #CheggMusic101 is presented by truth. It is the latest in Chegg’s ongoing series of music classes brought to students across college and high school campuses nationwide. This season’s contest follows successful programs that Chegg has conducted with top-artists including Rachel Platten, Macklemore & Ryan Lewis, Taylor Swift, Ed Sheeran, Imagine Dragons and U2.

“Chegg has partnered with truth and Shawn Mendes because we share a passion for educating students, both in and out of the classroom, and because we think it’s important for students to also have some fun while they’re learning,” said Mitch Spolan, EVP of Brand Partnerships at Chegg. “Chegg Music 101 has succeeded because it engages students in a uniquely enriching and entertaining way that also builds a deeper tie between them and the artists and brands they love.”

To learn more about the contest and nominate a school, visit chegg.com/play/Shawn.

To learn more about how to join truth and become part of the generation to end tobacco for good, visit: thetruth.com.