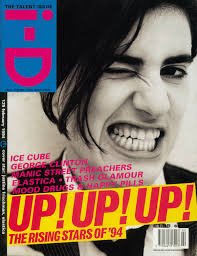 Elastica singer Justine Frischmann gave a rare interview, speaking about the Britpop band and her new career as a painter. Frischmann’s band split up in 2001 after two albums (1995’s ‘Elastica’ and 2000’s ‘The Menace’). Since Elastica’s demise, Frischmann has lived mainly out of the public spotlight, rarely giving interviews. She returned to music briefly in 2003 to co-write songs for MIA’s debut album. It is worth remiding ourselves how powerful of a presence her and the band was for the time, and her opportunity to reinvent herself was taken, and she’s much happier since those heady days.

“I don’t really have any desire to make music, to be honest. I really feel I’ve found my medium [with painting]. Also I think I’m a socially anxious person. I kind of deal with it but actually I’m really happy on my own. When I’m in the studio and things are unfolding and exciting I have that feeling that I’m exactly where I’m meant to be. I don’t think I ever really had that with music, it always felt like a rollercoaster ride and there was going to be a horrible smash. I got to go all over the world and have a real snapshot of the planet in ’95, ’96, and I got to meet a lot of my heroes. One of the most valuable lessons was to realize that success isn’t necessarily enriching or enlivening. We live in a culture where there’s so much emphasis on celebrity and we all grow up feeling like being famous must be really great.”