By: W. Andrew Powell, The GATE

Jake Owen, Kip Moore, Lee Brice, LANco, Jana Kramer, and over 25 other bands took to the stages at Windy City Smokeout on the July 14th weekend, and the fans lined up to sample chicken wings, brisket, corn, burgers, and even a crawfish boil while enjoying some of the best craft beer around–from Moody Tongue, 18th Street, Boulevard, Urban Chestnut, and Brooklyn Brewery, to name a few. It was a great trip, and Windy City Smokeout filled the three days of the festival with a great mix of talent, food, and beer that I enjoyed from the first act, to the last.

Plus, the festival hosted some of the nicest people I have had the pleasure of meeting, especially at a big event. From teaching me how to eat crawfish, to offering up space for me in front of the stage to get photos, I was constantly impressed with the fans at Windy City Smokeout.

The lineup was solidly satisfying, and represented a fantastic group of country talent that was clearly having a blast with the fans. From the bigger names, to up-and-comers, Windy City Smokeout had old-school country, alt-country, country folk, Americana, and pop country throughout the weekend.

The main stage drew the biggest crowds, but I have to admit that the Jack Daniel’s Whiskey Jam Stage was my favorite because it really let you get up-close and personal with the acts, and the artists all seem to be on their way to bigger gigs.

On Friday, I was especially a fan of Morgan Evans (his first single “Kiss Somebody” is out now), Clayton Anderson, and The Steel Woods, who took me back to old-school honky-tonk country with a solid rock edge.

Up on the main stage, the crowds gathered for Jake Owen, Jackie Lee, Steve Moakler, and one of my other favorites, LANco, whose song “Trouble Maker” made for one of the better moments of Friday night. LANco’s lead singer Brandon Lancaster just seemed to have a blast with the crowd, and at one point brought a drum down in front of the stage. All the acts brought their best to the stages, making you really feel part of the performances.

Saturday I really enjoyed Midland on the main stage, and Levi Hummon on the Jam Stage, not to mention the effervescent Jana Kramer, but the breakaway acts for the day for me were Michigan Rattlers, and Kip Moore. Michigan Rattlers felt like a duo who could pack a stadium with their talent and energy, but they were down-to-earth and electric.

Meanwhile Kip Moore is the easy-going prince of feel good country music. The crowd adored him, and he just rocked the stage throughout his set. He’s a solid performer that went just right with the amazing beer, and BBQ.

If I had to level one complaint at the festival, it was just that there were not nearly enough women up on stage. In total I don’t think there were more than three women performing all weekend, and out of about thirty acts, that seems lacking, to be honest. 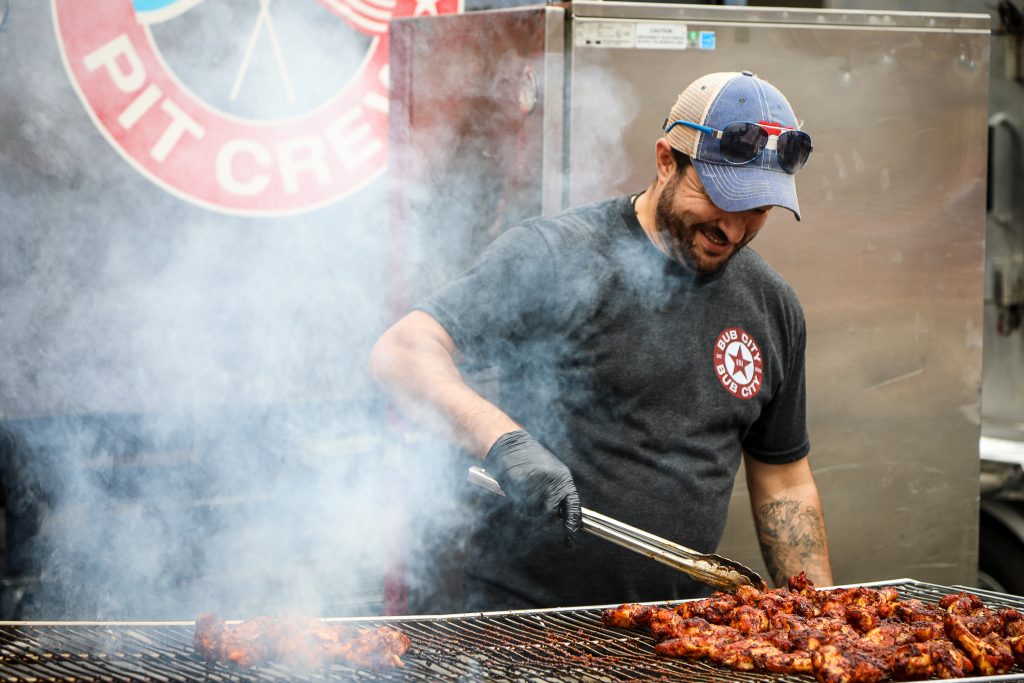 The lineup of BBQ joints and pitmasters was a thing of beauty, and Windy City Smokeout really had a great variety of food and flavours. The highlights were definitely the events, like the Whole Hog Brunch by Whistle Pig Whiskey, and Pearl’s Southern Comfort Crawfish Boil that featured Moët & Chandon champagne. The crawfish boil was a bit spicy, but entirely delicious, and came with sausage, potatoes, and corn mixed in. I didn’t know what to expect from sampling crawfish, or even how to eat them, but I got a few tips and the rest was awesome.

I ended up sampling everything from chicken wings to brisket, corn, and even some Bao at the event, but the highlights were the wings and the pulled pork. Among all the vendors I don’t think I heard or saw a single complaint, and the food was pretty reasonably priced at between $5 and $10 for most items. There were even a few desserts for sale (although I would say there could have been a few more sweet options on the menu), but the focus was all on the BBQ. 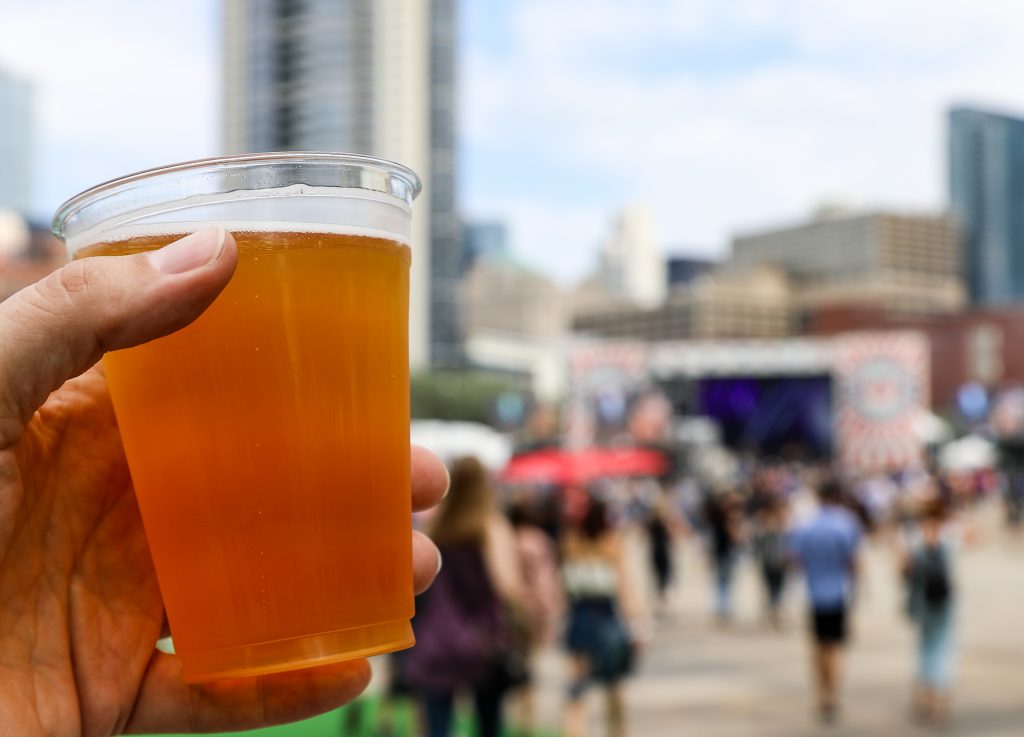 There was lots and lots of beer, and while that included some mainstream choices up-front-and-centre near the main stage, there was a whole row of craft beer that had something for any kind of beer drinker–from fans to novices. Wheat beers, farmhouse ales, stouts, and pilsners made it hard to pick just one beer to try, and I didn’t sample a single beer that I didn’t love. My absolute favorite beers though were from Chicago’s own Moody Tongue. Their Sliced Nectarine IPA, and Applewood Gold beers are nuanced, complex, satisfying brews that were excellent savoured alone, or with BBQ. If I could have brought some beer home, this was the brand I wanted. Hopefully someday they’ll make it to Canada.

Boulevard Brewing from Kansas City, Brooklyn Brewing, and Wiseacre also had some great offerings, as did Goose Island, naturally.

Considering all the states represented between the food and the beer, it felt a bit like a food festival, as much as a music festival, and offered a fairly rich tour of America if you had the time and the money to try everything.

And then there’s the city itself. Chicago was a lot of fun, and I didn’t realize how much there was to do until I started touring the city. Chicago has a lot of culture, events, and sights to see, and on the weekend of Windy City Smokeout there were no less than three other major events on in the city. Spending a weekend was a good introduction to the city, but a week might have been just enough to really dive in and see more.

Virgin Hotel Chicago was a great place to stay while I was in town, and it made for an excellent starting point each day. Their restaurant, Miss Ricky’s, has a delicious menu, including all-day breakfast, plus there’s a lounge (The Commons Club) in the hotel, a coffee shop (Two Zero Three), and a rooftop bar (Cerise Rooftop). The hotel was comfortable, roomy, and utterly charming, with a fresh approach to the room layout and customer service. The staff went out of their way to take care of guests, and I loved the hotel’s entire atmosphere. Absolutely a hotel I look forward to staying in again.

Among all the boutique hotels I’ve stayed in, the Virgin Hotel in Chicago is so far my favorite to date considering the price and the location, which is just a few blocks away from Millennium Park, and some of the city’s best attractions.

With a CityPASS, I was able to jump the lines and get into the Shedd Aquarium, Field Museum, and Art Institute of Chicago without paying for multiple tickets, and it came with VIP extras that normally cost more, like 3D movies and special attractions.

Thanks to Choose Chicago for the experience, the hospitality, and for introducing me to the Windy City.

Get in the spirit of Windy City Smokeout. Listen to tracks by artists featured at the festival: