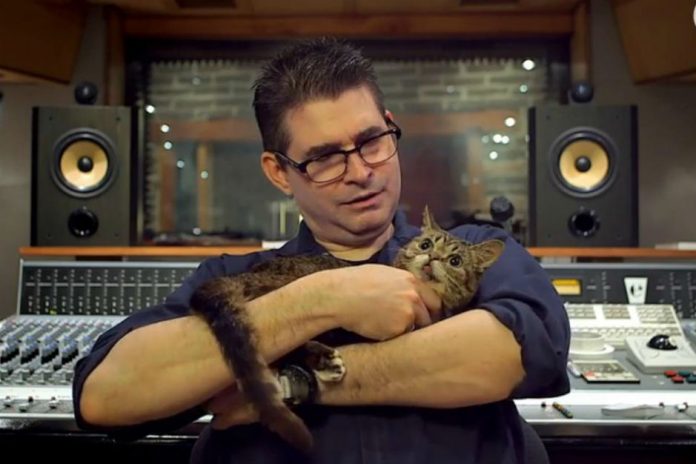 From the outset Shellac kept operations deliberately low-key. Their earliest music was released on 7″s with homemade covers, they performed in small atypical venues and refused to partake in any publicity. Their debut 7″ showcased three mid-paced tracks of thundering guitar noise over which singer/guitarist (and renowned recording engineer) Steve Albini snarled about fire and billiards. If early interviews are anything to go by, one of Shellac’s principal aims was to avoid acting anything like The Smashing Pumpkins.

Steve Albini: When we first started recording and doing stuff publicly in the 90s, it coincided with the beginnings of a feeding frenzy for underground bands. The greater entertainment industry had taken an interest in what had previously been an underground of experimental punk and post punk bands. On the part of a lot of bands from the underground there was an indulgence in that, where they were getting a public profile in a professional sense. They would have publicists and advertising and their record labels were doing promotions and journalists were being supplicated with free records and access to exclusive stuff. There was a branch of the underground that was playing along with this creeping professionalism and we wanted no part of that. From the beginning, we decided that we were just going to make records and put them out, and that was it. We weren’t going to do any act of promotion. We weren’t going to do any advances. We weren’t going to solicit interest from record labels, stores, journalists, media outlets or whatever. We were just going to go about our affairs as a band, play shows, make records and let people come across them as they would.

Part of it was the insult that all of us felt when stuff was being thrust at us. The “check out this hot new band” or “this is the record of the summer” kind of shit. It’s insulting and it makes me hate everyone involved. Whenever there’s active promotion on the part of somebody else, whenever I see somebody all dolled up for a fancy photograph and someone’s handing out flyers or whenever there’s active promotion for something like that, as an imposition on my day, I hate all those people and I want them to fail. I have a visceral reaction to advertising and promotion. There’s just something about salesmanship that grates on me on a very base level and I react very negatively towards it. I want those people to suffer and I want their enterprises to fail. Because of my feelings and the specific insult of having somebody tell you that you don’t know what music you like and that instead you should like this, we didn’t want to be a part of that. I didn’t want to trick anybody into buying our records. If you weren’t interested, we weren’t going to try to convince you. We’ve conducted ourselves that way ever since. I feel like it was the right decision then and I’ve been very happy with the way things have transpired in that we’ve never done anything embarrassing for attention and I don’t feel like anybody would have ever gotten into this band under false pretenses.