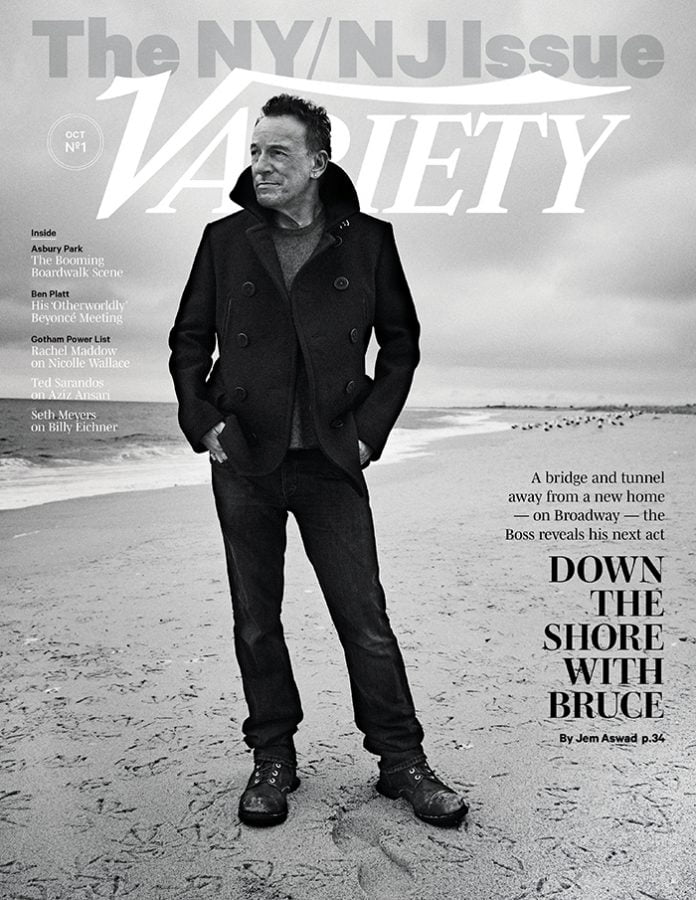 You’ve done so much looking back recently, between the book and “The River” anniversary tour and now this Broadway run. Any thoughts on what’s next?

I suppose the [solo] record that I haven’t released. It’s not topical at all — topical writing at the moment doesn’t hold a lot of interest to me. I really got out a lot of what I had to say in that vein on “Wrecking Ball.” I’m not driven to write any anti-Trump diatribe; that doesn’t feel necessary at the moment.

Why, because so many people already are?

Yeah, because it’s everywhere and all over, ya know? It feels a little redundant to me at the moment. And, once again, I always try to look at what I can deliver that’s personal to me and of most value. The audience has a wide variety of needs; whatever you’re writing, you’re trying to meet your own need, and as I’ve said in other interviews, Marty Scorsese once said, “The job of the artist is to make the audience care about your obsessions.” So I hope I write about the things that obsess me well enough for my audience to care about them.

But don’t you think your opinions about Trump would matter to your audience?

Well, if you read Charles Blow in The New York Times, he carries the flag pretty well. I’m ambivalent about … sort of getting on a soapbox. I still believe people fundamentally come to music to be entertained — yes, to address their daily concerns, and yes, also to address political topics, I believe music can do that well. But I still believe fundamentally it’s an affair of the heart. People want you to go deeper than politics, they want you to reach inside to their most personal selves and their deepest struggles with their daily lives and reach that place; that’s the place I’m always trying to reach. I’d never make a record that’s just polemical, I wouldn’t release it if I did. To me, that’s just an abuse of your audience’s good graces. But if I’m moved, I’ll write, say, something like “American Skin” [inspired by the 1999 shooting death of Amadou Diallo by New York City Police officers — who were later acquitted]. That just rolled very naturally for me, and that’s as good a topical song as I’ve ever written. And when it comes up, I write ’em. If I felt that strongly, I’d do it now. But I watch myself, because I think you can weigh upon your audience’s indulgence in the wrong way.

What do you mean?

I never wanted to be just a proselytizer for an ideological point of view. That’s not my job; that’s somebody else’s job. And if you even look back to Woody Guthrie’s material, he didn’t do that. He wrote these very full character pieces that, whether you were there in the Depression or not, they live today. They weren’t hollow, they weren’t one-dimensional; they were these very full character pieces about the times. I still aspire to that, really, and if it has political implications that’s fine and if it doesn’t that’s fine too.

His songs are about those times but aren’t bound to them.

Yeah, that’s what I mean. That’s the target; those are the kinds of works that you aspire to. It’s like if “The Rising” was only about 9/11, it would have been hollow. But you can listen to it today and it’s a record that has a spiritual resonance that, whether it was connected to that event or not, it retains its life and its poetry. If you delve deep enough into yourself —and that doesn’t mean it’s autobiographical, it means if you’re reaching deep enough into your own humanity — it becomes universal. And that’s a guiding light that I use when I write.