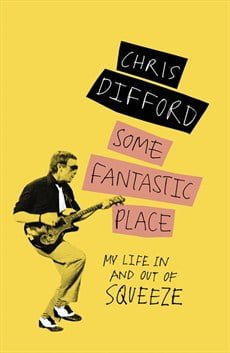 Chris Difford is a rare breed. As a member of one of London’s best-loved bands, the Squeeze co-founder has made a lasting contribution to English music with hits such as ‘Cool For Cats’, ‘Up The Junction’, ‘Labelled With Love’, ‘Hourglass’ and ‘Tempted’. Even before his first release in 1977, his love of writing lyrics has never wavered.

Over the course of a thirteen-album career with Squeeze, it was clear from the very beginning that Difford has few peers when it comes to smart, pithy lyricism. His ‘kitchen-sink drama’ style has drawn plaudits from fans on both sides of the Atlantic, and his influence is keenly felt today. The likes of Lily Allen. Mark Ronson, Kasabian, Razorlight and many more have recognized the debt they owe to Squeeze’s music and to Difford’s way with words, while journalists were moved by his winning combination with Glenn Tilbrook to dub the pair ‘The New Lennon and McCartney’.

In Chris’ new autobiography, Some Fantastic Place, he charts his life from his early days as a dreaming boy in south London with a talent for poetry to becoming a member of one of Britain’s greatest bands and beyond. Along the way he reveals the inspiration and stories behind Squeeze’s best-known songs, and his greatest highs and lows from over four decades of making music.

After the breakup of Squeeze in 1983 Difford continued writing songs with Glenn Tilbrook for artists such as Helen Shapiro, Billy Bremner and Elvis Costello. He has also written lyrics for music by Jools Holland, Elton John, Wet Wet Wet, Marti Pellow and others. In 1985 Squeeze reunited, having hits in the U.S. with Babylon and On, ‘Hourglass’ and ‘853-5937’. Difford left the group in 1999 launching a solo career in 2003 with his album I Didn’t Get Where I Am. Difford was also manager of Bryan Ferry and The Strypes. In March 2010, Difford curated Songs in the Key of London, an evening of music dedicated to the capital at the Barbican Centre, London.