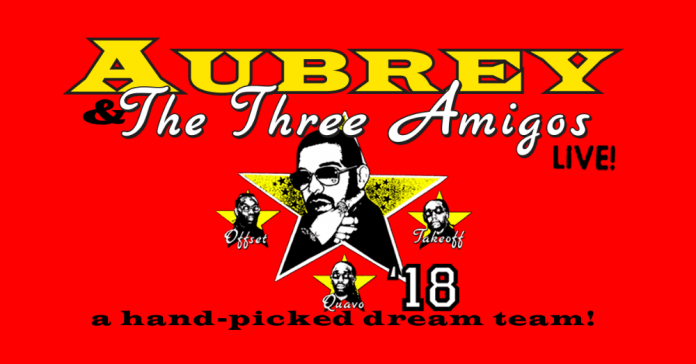 Due to overwhelming demand, platinum selling artist Drake is adding new dates to his ‘Aubrey and The Three Migos Tour.’ Drake is joined on the outing by special guests and “Walk It Talk It” collaborators Migos. The tour will now include a third Toronto date at Air Canada Centre (August 12), a third Chicago date at United Center (August 20), a third New York date at Madison Square Garden (August 27), a third Dallas date at American Airlines Centre (September 27), and a third Los Angeles date at STAPLES Center (October 14). Produced by Live Nation, the 46-date outing will kick off July 26 in Salt Lake City, UT and visit cities across the U.S. and Canada. The tour announcement follows the release of Drake’s hit singles “God’s Plan” and “Nice For What,” leading up to his highly-anticipated fifth studio album Scorpion.

Tickets go on sale to the general public today, May 18 at Ticketmaster.com stating at 10 am ET.