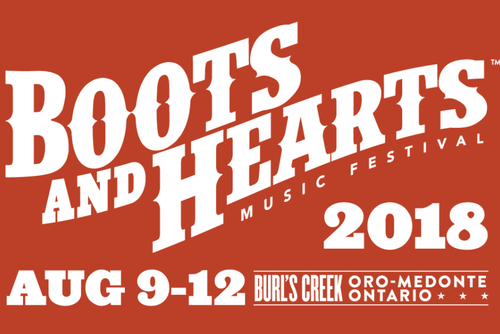 Warner Music Canada – home of Brett Kissel and Meghan Patrick, Canadian country music’s reigning Male and Female Vocalists of the Year as well as top charting artists The Washboard Union and Aaron Goodvin – are teaming up with Chevrolet and the Boots & Hearts Music Festival held annually in Oro-Medonte, Ontario to find Canada’s next Country Music Superstar.

The Boots and Hearts Emerging Artist Showcase kicks off today with a nationwide search where musicians are encouraged to put together a 1 – 2 minute video that includes some performance as well as their own personal story.  Videos can then be uploaded to bootsandhearts.com/showcase . The deadline for submissions is June 15, 2018.  Seven finalists will be chosen from all the submissions and announced June 29.  Between June 29 and July 13, voting will be held on Chevrolet Canada’s YouTube channel to select the eighth finalist.  All finalists will perform at the Boots & Hearts Emerging Artist Showcase at the festival on August 9.  The winner will be announced on August 12, the final day of the festival, and will perform in front of thousands of country music fans on Boots and Hearts mainstage ahead of Brett Young and Thomas Rhett.

The winner of the 2018 Boots & Hearts Emerging Artist Showcase will win a 5-day trip for two to Nashville, a writing session with a premiere Nashville producer or songwriters, a professional photo shoot; a recording session and Warner Music Canada will release a recorded single to all download and streaming providers.

The Boots & Hearts Music Festival takes place August 9 – 12 at Burl’s Creek in Toronto’s Backyard.  Tickets can be purchased at www.bootsandhearts.com.