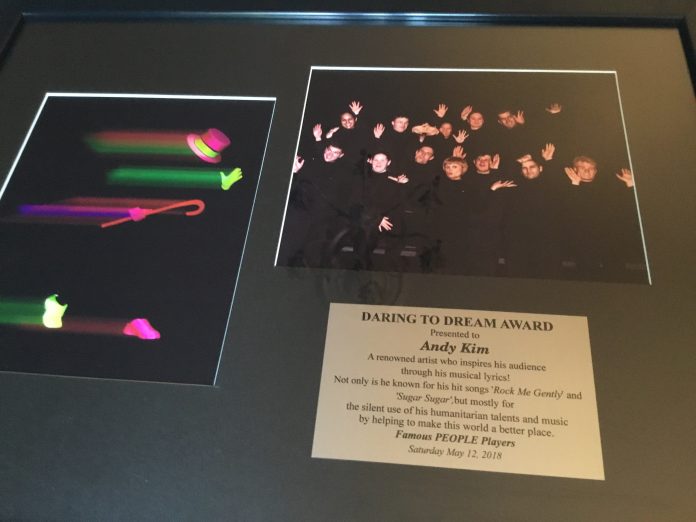 Andy Kim has added a new award this month to his list of accolades. The Famous PEOPLE Players Dinner Theatre has honoured the Canadian music icon behind classic hits such as “Sugar, Sugar” and “Rock Me Gently” with the Daring To Dream Award in applause for his continued charity work within the community.

“Famous PEOPLE Players honoured the great Andy Kim with the Daring To Dream Award for his tireless work to so many charitable organizations,” says Famous PEOPLE Players’ Diane Dupuy. On his award, FPP said “Andy Kim is a renowned artist who inspires his audience through his musical lyrics! Not only is he known for his hit songs “Rock Me Gently” and “Sugar, Sugar”, but mostly for the silent use of his humanitarian talents and music by helping to make this world a better place.”

Famous PEOPLE Players Dinner Theatre is known for their exquisite, animated performances featuring life-size caricatures and props, all defying gravity before your eyes.

Andy Kim was born in Montreal, and found fame in New York City at just 16 years old when he wrote “How’d We Ever Get This Way?” — the first of what would be nine Billboard Top 40 hits — including #1 songs “Rock Me Gently” and “Sugar, Sugar,” one of Billboard’s “Greatest Songs of All Time.”

A true Canadian son, Andy has been awarded the country’s top industry honor twice, the JUNO Award for outstanding achievements in the record industry, as well as the Indie Award for Favorite Solo Artist in 2005. Andy is a member of Songwriters Hall of Fame and was inducted into Billboard’s Hit Parade Hall of Fame in 2010. Over his epic career, Andy has sold over 30 million records, with songs covered by music history’s greats, including Wilson Pickett, Tom Jones, Ike & Tina Turner, and Bob Marley. His latest album, It’s Decided, was released in April, 2015 on Arts & Crafts to critical acclaim. In May, 2016, Andy was inducted into the Canadian Music Hall Of Fame. Andy Kim’s music can be heard in hit series such as Showcase’s Ray Donovan and Netflix’s Mindhunters. Pizza Pizza is currently using their own version of Sugar, Sugar in their campaigns to celebrate their 50th Anniversary throughout 2017 and into 2018.

“It was a magical evening,” says Dupuy of the sold-out crowd in attendance May 12th. “His music came to life on stage under the illumination of black light, which enthralled the audience to standing ovation.

“The money raised supported our educational programs for schools to attend performances and workshops by FPP.”