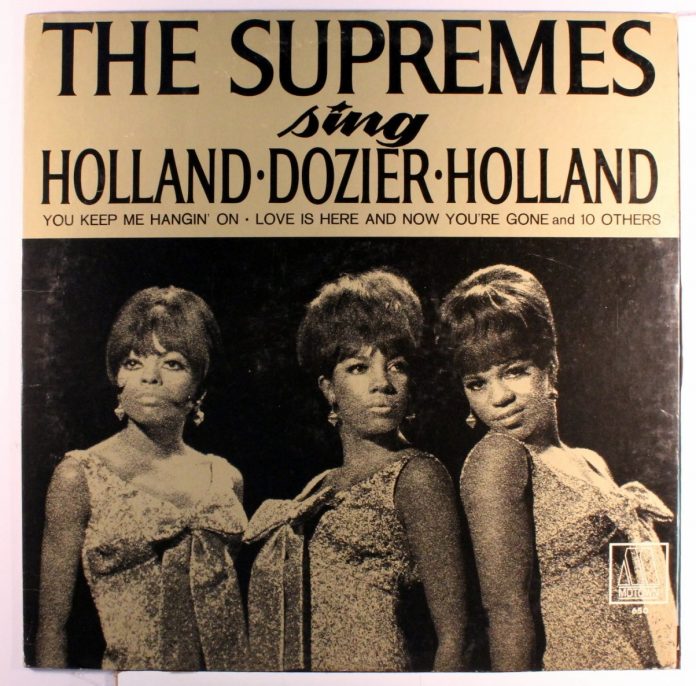 On June 29, in anticipation of the upcoming 60th anniversary of Motown — a.k.a. Hitsville U.S.A. — and inspired by the album’s own recent 51st anniversary, Motown is releasing a 51-track, 2-CD Expanded Edition of The Supremes’ tenth studio effort, the chart-topping The Supremes Sing Holland-Dozier-Holland. The collection magnifies the scope of a seminal album that made history, including 27 tracks that are heard here for the first time via a number of updated mixes and alternate versions, as well as electrifying live performances captured at the Copacabana nightclub in New York City in May 1967, the last recorded performance of the original trio: Diana Ross, Mary Wilson and Florence Ballard.

The Supremes Sing Holland-Dozier-Holland, originally released in January 1967, further cemented the group’s chart prowess and vocal harmonizing skills. Inspired by the production team who along with the group had come to define the “Motown Sound” – producers Brian Holland and Lamont Dozier and lyricist Edward Holland Jr. – spawned a pair of universally loved No. 1 singles, the forever-pleading “You Keep Me Hangin’ On” and the heartbreakingly dramatic “Love Is Here and Now You’re Gone.” The LP also went to No. 1 on the Billboard R&B Albums Chart, their fourth album to do so up to that point, while peaking at no. 6 Pop.

Formed in Detroit as The Primettes in 1959, The Supremes were Motown’s most successful act of the 1960s, scoring 12 No. 1 singles. They also continue to reign as America’s most successful vocal group to date. Their influence not only carries on in contemporary R&B, soul and pop, they also helped pave the way for mainstream success by African-American artists across all genres.

The expanded The Supremes Sing Holland-Dozier-Holland includes the original mono album on CD for the first time and the stereo version newly remastered, plus several rare and new mixes created exclusively for this expanded edition, featuring alternate versions and alternate mixes of the hits. Among them: the original film version of the No. 1 hit “The Happening,” which was re-cut for the single version and is now a revised, correct mix and edit of the version that appeared in The Supremes box set; a version of “Love Is Here and Now You’re Gone” with a vocal previously available only on a Japanese Greatest Hits release; a new mix of “You’re Gone (But Always In My Heart)” that includes previously muted strings; and a rare live concert from the Copacabana in New York, in May 1967, one of the last performances of the group with Florence Ballard. This spirited show, two years on from the Supremes album Live at the Copa, is a masterful blend of Supremes hits and show tunes, the epitome of Motown founder Berry Gordy’s vision for his Detroit-based company.

Also included in the package are two booklets; they are, in addition to the music, a collector’s dream: one, with 32 pages, has a new essay, detailed track annotations, a Supremes timeline, a new interview with Lamont Dozier, and rare and never-before-seen photographs. The other, with 24 pages, recreates The Supremes’ 1967 souvenir tour program.

Fifty-plus years on, The Supremes Sing Holland-Dozier-Holland receives a well-deserved remastered expansion, produced by the team responsible for previous expanded editions, Andrew Skurow and George Solomon, and remastered by Universal Music’s Kevin Reeves. These collections continue to keep us hangin’ on to the most intuitive and most indelible blend of perfect harmonizing and majestic songwriting of the very best artists and creative teams Motown had to offer.

Disc 1
Original Mono (1-12) and Stereo (13-24) LPs
You Keep Me Hangin’ On
You’re Gone (But Always In My Heart)
Love Is Here And Now You’re Gone
Mother You, Smother You
I Guess I’ll Always Love You
I’ll Turn To Stone
It’s The Same Old Song
Going Down For The Third Time
Love Is In Our Hearts
Remove This Doubt
There’s No Stopping Us Now
(Love Is Like A) Heat Wave

Live At The Copa May 1967
Put On A Happy Face
Medley: Stop! In The Name Of Love/Come See About Me/My World Is Empty Without You/Baby Love
My Favorite Things
You Keep Me Hangin’ On
The Lady Is A Tramp/Let’s Get Away From It All
I Hear A Symphony
From This Moment On
Queen Of The House
Love Is Here And Now You’re Gone
Somewhere
You Can’t Hurry Love
Medley: Thoroughly Modern Millie/Second Hand Rose/Mame
Group Introductions
You’re Nobody Til Somebody Loves You
The Happening