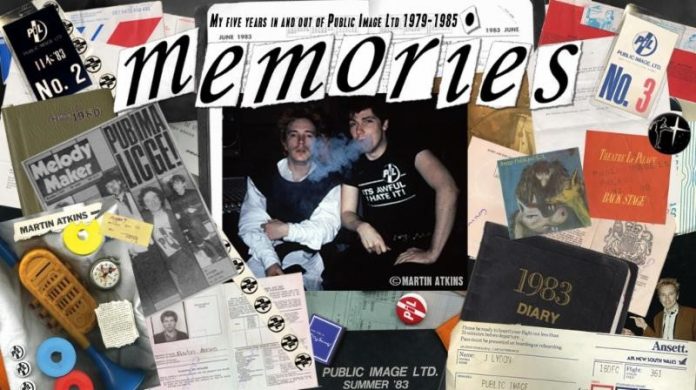 “For a large chunk of my time with PiL, we were the most dangerous band on the planet – no one knew what we were going to do next – (least of all us) – it was special and crazy and awesome as fuck,” begins acclaimed drummer Martin Atkins in his PledgeMusic campaign for his upcoming book, Memories – My Five Years In and Out of Public Image Ltd. (1979-1985). Atkins made his major debut in the late 1970’s as the on-again-off-again drummer for John Lydon’s (more commonly known by his stage name Johnny Rotten) post-Sex Pistols’ experimental project, Public Image Ltd., and he has tales to tell.

As of now Martin Atkins has made his PledgeMusic campaign the sole way of pre-ordering the book. In conjunction with the pre-order, many special items are available via PledgeMusic, including a rare 1979 cardboard lyric print that can be autographed by request, a signed drumhead, signed drumsticks, a live drum session, and more.

Martin Atkins is the definition of entrepreneurial activity in cultural arts endeavors. His 35+ years in the music business spans across genres and borders and industries. He was a member of Public Image Ltd. and Killing Joke. He founded industrial supergroup Pigface, The Damage Manual, and Murder Inc., and has contributed to Nine Inch Nails (for which he has a Grammy) and Ministry. He is the owner of Invisible Records and Mattress Factory Recording Studios (est. 1988). He is the author of Tour:Smart, Welcome To The Music Business….You’re F*cked!” Band:Smart, the new Music Industries Coordinator at Millikin University in Decatur Illinois. Martin is a producer, drummer, documentary filmmaker, DJ, and father of four. Whatever the future of entrepreneurial music business education is, you can pretty much bet that he’ll be in the middle of it.

The PledgeMusic site also includes a personal video filmed by Martin Atkins discussing the book. There are only 40 days left to take part in the campaign, so act fast! See here for all contribution items and the video: https://www.pledgemusic.com/projects/martin-atkins-memories

“If there is one thing that has changed over that time it has been my understanding that different people really do see things differently – hence the title Memories. I do very much care about the sum of the parts and the parts that make up the sum,” says Martin Atkins. “This isn’t my book in the same way that PiL back then wasn’t just John’s. It was all of ours. And as much as I might prefer to not be called a twat by Keith Levene – his – or anyone else’s exclusion from this book seems incorrect. There is more to be learned from seeing other people’s points of view than by slamming the door. So, I’ve been careful to talk to a lot of people that were around us. You might call this the companion book to the first part of The Public Image Is Rotten documentary. My memories are intense and when that fails, I have my diaries!

This is a journey for me too – I’ve already experienced a few things that have surprised me, stretched myself in ways that I am proud of and I’m excited to continue this journey of discovery and documentation with you.”

To pre-order your copy of Memories – My Five Years In and Out of Public Image Ltd. (1979-1985) and for more information, visit the PledgeMusic campaign page.