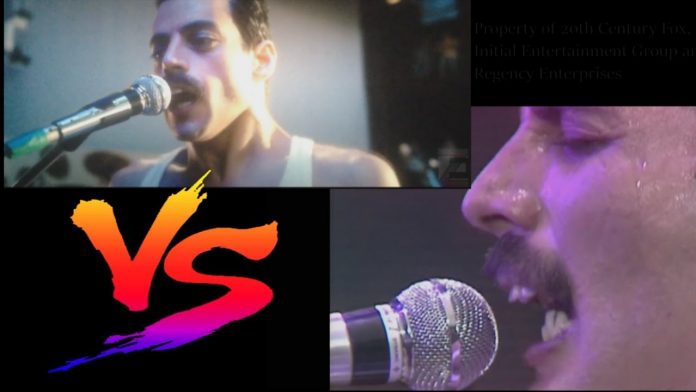 Hong Kong video editor This Game Is Easy edited the original video of Queen’s brilliant Live Aid performance with the new Bohemian Rhapsody movie’s version, and yet another reason why I love the internet. The editor writes, “I recently saw Bohemian Rhapsody in theaters and right as the Live Aid part started I was so surprised at how accurate it is to the original live performance. I wanted to compare it side by side but noticed it doesn’t work well as half the songs are cut and the songs are edited so I decided to make a comparison.”

According to Deadline, audiences remain in love with Bohemian Rhapsody, giving it an A CinemaScore, 88% overall positive, and four-and-half stars on Screen Engine/ComScore’s PostTrak, topped off with a super-definite recommend of 75%. Overall demos for Bohemian Rhapsody are 51% female, 49% male, with 77% over 25, 31% over 45, 52% under 35, with the single largest quad being 25-34 at 26%. Which means Queen just made a whole new batch of fans this weekend, including a large group who weren’t even alive when Live Aid happened in 1985.