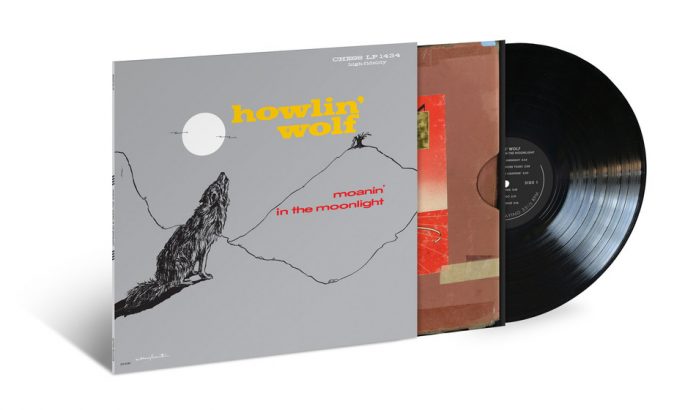 Chester Arthur Burnett, better known to blues fans as Howlin’ Wolf, remains one of the essential exponents of the electric blues. With a raw, booming voice and explosive guitar and harmonica styles to match, the Mississippi-bred Wolf made music that was unmatched in its primal ferocity. In the process, he helped to put Chess Records on the map as America’s preeminent blues label.

Now, just in time for the 60th anniversary of Moanin’ In The Moonlight’s original release, Geffen/UMe has released a special vinyl edition of the original mono album. Remastered from the original flat master tape, this new edition features a high quality 150-gram black vinyl pressing housed in a printed sleeve with scans of the analog tape box and comes in a distinctive tip-on jacket reproducing the album’s distinctive original cover art. A perfect tribute to Howlin’ Wolf’s originality and influence, this anniversary edition of Moanin’ In The Moonlight is available now.

Howlin’ Wolf performed throughout the South in the 1930s and 1940s, having reportedly learned to play guitar and harmonica from legendary bluesman Charlie Patton and Sonny Boy Williamson, respectively. He was discovered in the early 1950s by future Sun Records founder Sam Phillips, who recorded Wolf’s early sides, some of which he licensed to Chess. Wolf eventually relocated to Chicago and began recording for Chess directly.

Like many LPs of the period, Moanin’ In The Moonlight includes tracks stretching back several years, including a trio of numbers—”Moanin’ at Midnight,” “How Many More Years” and “All Night Boogie”—recorded in Memphis in the early ’50s with Sam Phillips. The album’s nine remaining songs were recorded after Wolf’s move to Chicago and produced either by label owners Leonard and Phil Chess, or by staff musician/songwriter Willie Dixon. Moanin’ In The Moonlight features four songs that had been hits on Billboard’s national R&B charts: “Moanin’ at Midnight”, “How Many More Years,” “Smokestack Lightning” and “I Asked for Water (She Gave Me Gasoline).”

In the years since his passing in 1976, Howlin’ Wolf has been widely recognized for his musical achievements. He is a member of the Rock and Roll Hall of Fame, the Blues Hall of Fame, the Memphis Music Hall of Fame and the Mississippi Musicians Hall of Fame. In 2011, Rolling Stone ranked him number 54 on its list of the “100 Greatest Artists of All Time.” Meanwhile, the Howlin’ Wolf Foundation continues to preserve and extend the artist’s legacy.

Moanin’ In The Moonlight continues to be singled out for individual praise. In 1987, the album received a prestigious W.C. Handy Award under the category of “Vintage/Reissue Album (US).” Rolling Stone magazine ranked the album as #153 on their list of the 500 greatest albums of all time. And seminal rock critic Robert Palmer cited “How Many More Years” as the first record to feature a distorted power chord.

Although Howlin’ Wolf would continue to release new albums for the next decade and a half, it’s widely agreed that Moanin’ In The Moonlight is the definitive document of his remarkable talent. Now it can be heard once again, in all of its original vinyl glory.

MOANIN’ IN THE MOONLIGHT TRACK LISTING
SIDE A
1. Moanin’ At Midnight
2. How Many More Years
3. Smokestack Lightnin’
4. Baby, How Long
5. No Place To Go
6. All Night Boogie