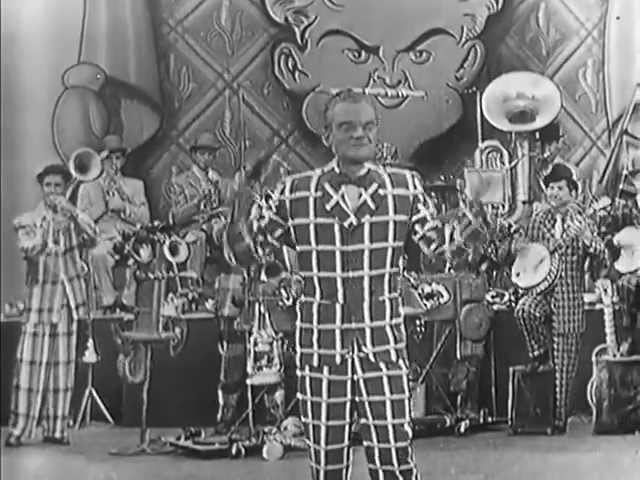 In this 1952 episode of the television show Four Star Revue, legendary musician Spike Jones and his talented orchestra, offered a hilarious history of music. Not all of it is going to accurate, mmkay?

These routines are filled with musical references that few in today’s audiences would understand. There was an adage that “you don’t chew gum in the orchestra” that was widely known of in popular culture. The upturned trombone bell is no doubt a reference to Dizzy Gillespie’s trumpet. The giant portrait of Spike behind the band comes from Paul Whiteman, who used a similarly placed caricature of himself with his band. References to “all girl bands”, players opening their case and blowing the dust off their instrument (they never practice…), a harpist knitting during a piece (they count a lot of rests and of course the harp isn’t utilized in most pieces of symphonic repertoire..). The tuba which expels bubbles (ala Lawrence Welk), and many more. And Spike calmly presiding over all of the bedlam, chewing away on a stick of Beeman’s. Among his sidemen for this NBC TV series: George Rock, trumpet; Mickey Katz, clarinet; Tommy Pederson, trombone.﻿