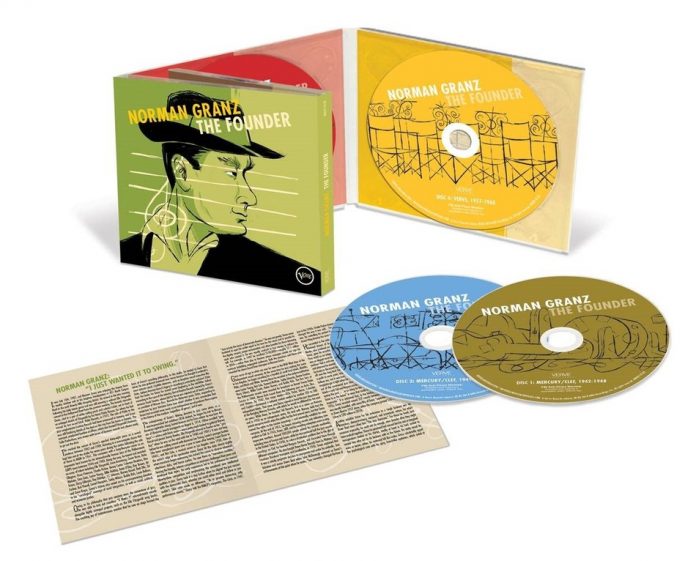 In jazz circles, few names command more respect than Norman Granz. Although he wasn’t a musician, Granz (1918-2001) was as responsible as any individual for popularizing jazz and promoting the careers of many of the genre’s greatest artists. Granz’s incredible half-century career first took off with his creation of the groundbreaking Jazz at the Philharmonic concert series. But Granz was equally influential for the series of record labels that he launched in the 1940s and 1950s: Clef, Norgran and Verve.

Those companies became home to many of jazz’s most important and influential artists. And, unlike many of his contemporaries, Granz combined his love for the music with a passion for social justice, championing African-American musicians at a time when those musicians were often exploited and disrespected.

Now, in honor of the hundredth anniversary of Norman Granz’s birth, Verve/UMe has assembled The Founder, a four-CD/digital box set celebrating his remarkable life and career. The historic package—which will release on December 7—features a massive chronological assortment of music spanning Granz’s remarkable career and featuring music by most of the great musicians he recorded.

The package also includes illuminating liner notes by jazz historian and Granz authority Tad Hershorn, author of the Granz biography Norman Granz: The Man Who Used Jazz for Justice. As Hershorn writes, “The underpinnings of Granz’s lifelong devotion to jazz came when, as a near-impoverished but ambitious UCLA student, he began his trek to African-American nightclubs along Central Avenue, not far from where he was born the son of Ukrainian Jewish immigrants.”

“Granz hit the clubs almost nightly when musicians began welcoming him behind the scenes to observe rehearsals, after-hours clubs, and house parties. He saw them as ‘marvelous crucibles,’ hearing the friendly, intense competition as musicians challenged their peers and developed their styles. His early experiences led to his preference for musical blow-by-blow competition and emphasizing the emotional over intellectual qualities in jazz. Granz took it a step further when he aligned the jam session with the democratic ideal, whereby you could either stand and deliver, or you couldn’t. Skin color made no difference. ‘As in genuine democracy, only performance counts,’ Granz told the NAACP’s magazine, The Crisis, in 1947. ‘Jazz is truly the music of democratic America.'”

Granz’s parallel passions for jazz and social justice was reflected in the ambitious artist lineups he assembled for his Jazz at the Philharmonic concerts, many of which are featured on The Founder. These shows were almost single-handedly responsible for moving jazz from smoky clubs to prestigious theaters and, in the process, introduced jazz improvisation to new and receptive audiences. The series also helped to break down many of the era’s social barriers, showcasing a racially-mixed assortment of musicians and singers from a variety of musical backgrounds.

The four CDs that comprise The Founder encompass some of the most significant jazz music recorded in the 20th century, beginning with Granz’s founding of the Clef label in 1942 and culminating in his retirement and departure from Verve Records (which he’d launched four years earlier) in 1960.

Disc 1 opens in 1942, during the early wild-west days of independent label recording, with historic performances by such rising players as Dexter Gordon, Coleman Hawkins, Charlie Parker and Lester Young, who were among the first musicians that Granz recorded. Disc 1 also captures a young Nat “King” Cole, accompanied by Illinois Jacquet and Les Paul, on the crowd-thrilling “Blues,” which contrasts with the bouncy pop which would later make Cole a mainstream superstar.

Disc 2, which spans 1949-1954, finds Granz settled in at the top of the jazz world and recording a varied assortment of some of jazz’s leading lights, including the great pianist Oscar Peterson, charismatic vocalists Anita O’Day and Fred Astaire, and innovative bandleaders Count Basie and Benny Carter.

Disc 3, recorded between 1954 and 1957, encompasses the early years of the Norgran and Verve labels, which Granz founded during that period, and features historic performances by such icons as Billie Holiday, Ella Fitzgerald, Louis Armstrong, Bing Crosby, Lester Young and Lionel Hampton.