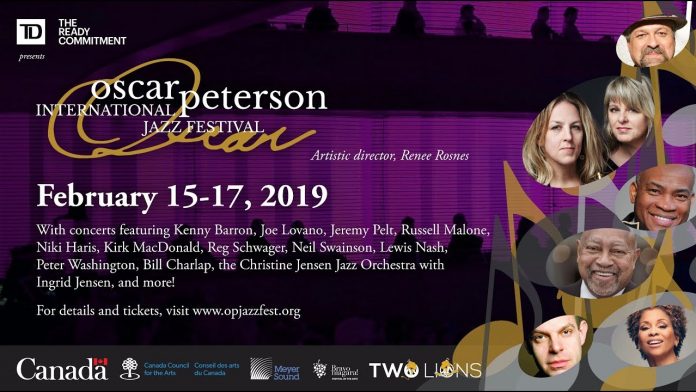 The 2nd annual Oscar Peterson International Jazz Festival, with artistic director Renee Rosnes at the helm, will feature top jazz artists from both Canada and the United States in collaborative, once-in-a-lifetime performances in Niagara Wine County. The festival runs from Friday, February 15, 2019 through Sunday, February 17, 2019.

The Oscar Peterson International Jazz Festival (OPIJF), one of Canada’s most anticipated winter music events, is named for the internationally renowned Canadian jazz giant. It was created to present the essence of jazz and the sound of swing. Oscar Peterson dedicated his life to music with intense vitality: music which encompasses the entire living history of jazz, and the OPIJF represents the same unshakable excellence and integrity for which he was known. It is the mission of the OPIJF to showcase and celebrate world-class Canadian talent performing alongside American and international artists, thereby ensuring the future of jazz in Canada. Under the expert guidance of Artistic Director Renee Rosnes and Artistic Producer Kelly Peterson, this annual festival provides a unique opportunity to hear rare combinations of musicians and individual stars, in performance. The OPIJF is produced by Bravo Niagara! Festival of the Arts in partnership with The Estate of Oscar Peterson. Celebrate the past, the present, and the future — all at the same time.

All of the events are here and you can watch the video for the festival below.

Renee Rosnes is one of the premier jazz pianists and composers of her generation. Upon moving to New York City from Vancouver, Canada, she quickly established a reputation of high regard, touring and recording with such masters as Joe Henderson, Wayne Shorter, Bobby Hutcherson, J.J. Johnson, James Moody, and legendary bassist Ron Carter. She was a charter member of the all-star ensemble, the SFJAZZ Collective, with whom she toured for six years. Ms. Rosnes has released 17 recordings, and has appeared on many others as a sideman. In 2016, Written in the Rocks (Smoke Sessions) was named one of ten Best Jazz Albums of the Year by The Chicago Tribune, one of the Best Albums in all genres of music by The Nation, and was awarded a 2017 Canadian Juno (her fifth Juno award). JazzTimes wrote, “Ms. Rosnes delivers conceptual heft, suspenseful compositions and mesmerizing performances,” and DownBeat praised it as “an exceptional achievement” stating “Rosnes is a virtuoso composer.” The band’s most recent session, Beloved of the Sky (2018) draws inspiration for the title track from Canadian painter Emily Carr, and features master musicians Chris Potter, Steve Nelson, Peter Washington and Lenny White.