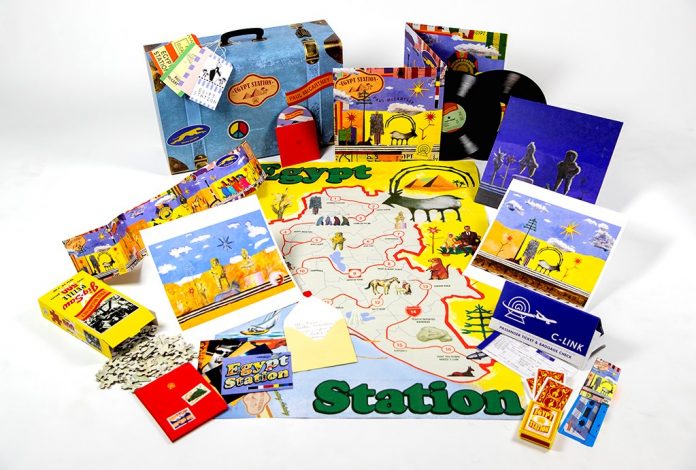 Paul McCartney has confirmed the release of the Egypt Station Traveller’s Edition, out May 10 via Capitol Records.

This strictly limited deluxe edition of the #1 album Egypt Station will be a one-time-only pressing limited to 3000 numbered cases. The Traveller’s Edition arrives in a vintage style suitcase and contains exclusive previously unreleased tracks, hidden rarities and all the essentials needed on your journey to Egypt Station and beyond.

All those who sign up at https://PaulMcCartney.lnk.to/TravellersEditionSignUpPR by 9 PM ET FEB 14 will be emailed a unique link which allows a first chance at purchasing the strictly limited Traveller’s Edition.

Emails with links for first access to pre order will be sent out at 9AM ET FRIDAY FEBRUARY 15.

The Egypt Station Traveller’s Edition audio and video content include:

The special features of the Box Set include:

Egypt Station was released September 7, 2018. The album entered the Billboard 200 at #1, making it the third Non-Beatles/Wings McCartney effort to top the U.S. chart and Paul’s first Stateside #1 since 1982’s Tug Of War—and Paul’s first solo album to enter the chart at #1. E

Paul’s Freshen Up Tour continues to pack stadiums and arenas across the globe, resuming March 20 at the National Stadium in Santiago, Chile, and running through July 13 at Dodger Stadium in Los Angeles.