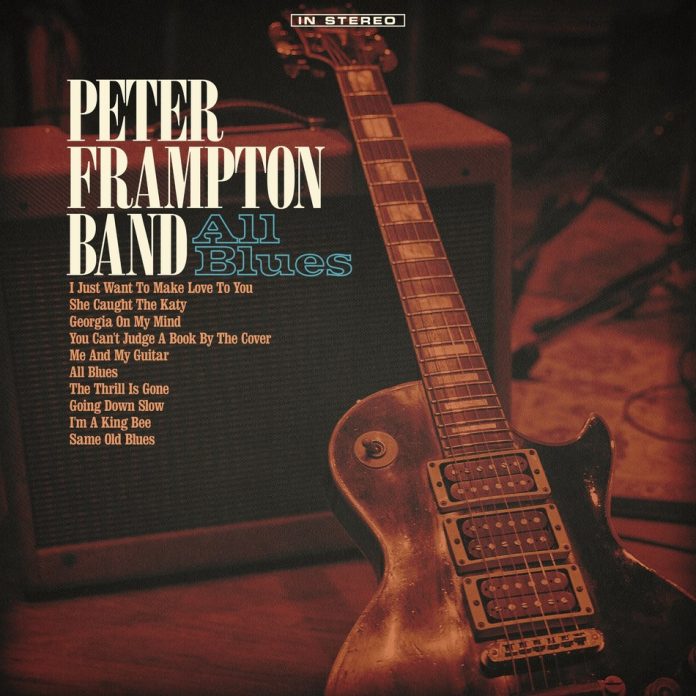 All Blues, the forthcoming covers album from the Peter FramptonBand, is set for release on June 7. The album is a collection of Frampton’s favorite blues classics and was recorded with his longtime touring band, made up of Adam Lester (guitar/vocals), Rob Arthur (keyboards/guitar/vocals) and Dan Wojciechowski (drums).

All Blues was recorded at Frampton’s studio in Nashville, Studio Phenix, and was co-produced by Frampton and Chuck Ainlay. The album features additional collaborations with Larry Carlton, Sonny Landreth and Steve Morse.

The vinyl will be available as a double LP and also as a limited edition translucent blue color pressing exclusively at PeterFrampton.com. The double LP will include the bonus track “I Feel So Good,” which was written by Big Bill Broonzy and popularized by Muddy Waters.

Of the album, Frampton explains, “I have always loved to play the blues. When we formed Humble Pie, the first material we played together was just that. For the last two summers I had been playing a handful of blues numbers every night on stage with Steve Miller Band. I enjoyed this immensely and it gave me the idea of doing an ‘All Blues’ album live in the studio with my band. We started the resulting sessions 9 days after coming off the road last year. Over a two-week period, we recorded 23 tracks, all live in the studio. The energy of these tracks is completely different from building a track one instrument at a time. With this recording, we pay tribute to all the original artists who invented this incredible music. I hope you can hear and feel our enjoyment. I’m not sure if you can say we had fun playing the blues. But we definitely did.”

In conjunction with the album’s release, Frampton will kick off Peter Frampton Finale—The Farewell Tour presented by SiriusXM—an approximately 50-date run this summer and fall produced by Live Nation. Frampton will retire from regular vigorous touring at the end of this year due to his diagnosis of the autoimmune disease Inclusion Body Myositis (IBM). IBM is a progressive muscle disorder characterized by muscle inflammation, weakness and atrophy.

The tour will feature special guest Jason Bonham‘s Led Zeppelin Evening, as well as Julian Frampton on the west coast stops, with additional surprise guests to appear on select dates. Tickets are on sale now and VIP packages will also be available at www.frampton.com. $1 of every ticket sold, as well as any donations, will benefit The Peter Frampton Myositis Research Fund at Johns Hopkins, a newly established fund by Frampton and Johns Hopkins, where he’s being treated.

Peter Frampton remains one of the most lauded artists in rock history. On May 7, the Music Business Association will present him with the Chairman’s Award for Sustained Creative Achievement at the Awards & Hall of Fame Dinner that is part of the Association’s annual conference—Music Biz 2019—set to take place May 5-8 in Nashville. Frampton was also recently honored with the Les Paul Innovation Award at the 2019 NAMM Show’s 34th annual TEC Awards, and celebrated the 43rd anniversary of his fifth solo album, Frampton Comes Alive!, one of the top-selling live records of all time (over 17 million copies sold worldwide).