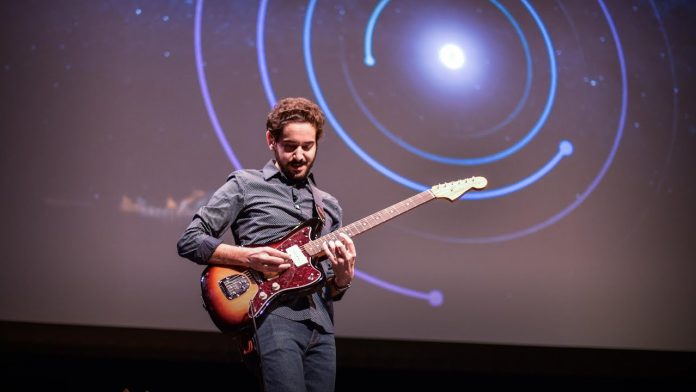 Is outer space really the silent and lifeless place it’s often depicted to be? Perhaps not. Astrophysicist and musician Matt Russo takes us on a journey through the cosmos, revealing the hidden rhythms and harmonies of planetary orbits. The universe is full of music, he says — we just need to learn how to hear it.

Something even more exciting about this system especially for me, and that’s the Trappist One is a resonant chain and so that means for every two orbits of the outer planet, the next one in orbits three times and the next one in 4 and then 6 9 15 and 24. So you see a lot of very simple ratios among the orbits of these planets. Clearly if you speed up their motion you can get rhythms right. One beat say for every time a planet goes around. But now we know if you speed that motion up even more you’ll actually produce musical pitches and in this case alone those pictures will work together making harmonious even human-like harmony.