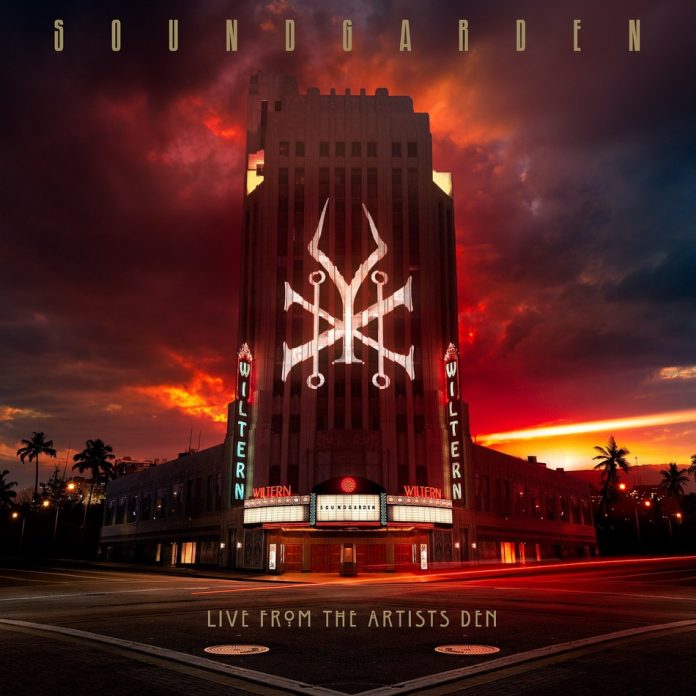 Soundgarden along with The Chris Cornell Estate, UMe and Artists Den, the critically acclaimed music series best known for presenting intimate concerts by extraordinary artists in non-traditional settings, announced today an unprecedented line-up of immersive events and a suite of products titled Soundgarden: Live from the Artists Den. The events will feature a reimagined experience of Artists Den’s previous concert taping of legendary Seattle rock band Soundgarden and beloved lead singer and songwriter Chris Cornell, with stops in Los Angeles and New York, as well as a special screening in Seattle.

On February 17, 2013, Soundgarden concluded a sold-out U.S. Winter tour in support of King Animal, their first studio album in over sixteen years, with a special Live from the Artists Den taping at the Wiltern in Los Angeles. Soundgarden mixed new songs with classic radio hits and rarities performed live for the first time in front of a rapturous crowd. The concert has become the all-time most requested Soundgarden live show for an official release. The 29 song, nearly two-and-a-half-hour show, encompasses the band’s rich musical legacy, spanning their early years with “Hunted Down,” through their monumental albums Badmotorfinger and Superunknown respectively with “Outshined” and “Black Hole Sun,” and to their final record, with nearly every song from King Animal including “By Crooked Steps” and “Been Away Too Long.” Live From The Artists Den features 21 songs never before released on a Soundgarden concert film, including 17 making their first appearance on a live album, and highlighted by “Blind Dogs,” which the band performed on stage for the first time ever at the Wiltern show. Pre-order Soundgarden:Live from the Artists Den now. View Official Trailer

Six years following the original taping, Artists Den in partnership with UMe, will release a selection of products for Soundgarden: Live from the Artists Den on July 26, 2019. The limited-edition Super Deluxe box will feature the complete 29-song concert film in 5.1 surround sound and stereo on Blu-ray, and more than 30 minutes of bonus interviews with the band, in addition to four black 180-gram audiophile LPs, 2CDs, a 40-page photo book, four band member lithos, and replica artist all-access pass and ticket stub from the original show. Additional products scheduled for release include: 4LP 180-gram audiophile black vinyl, limited edition 4LP color vinyl (each disc will feature a unique combination of splattered colors), Blu-ray and 2CD. Digital live album and digital live video will be available for preorder on May 31.

Speaking about Live from the Artists Den, Soundgarden guitarist Kim Thayil said, “We were very proud and excited to document the performance of our new material from King Animal, and to celebrate with each other and our fans.”

In advance of the album release, Artists Den will present Soundgarden: Live from the Artists Den immersive events of the full 29 song show in New York and Los Angeles, as well as an additional screening in Seattle. The stops in New York and Los Angeles will each showcase 12 HD camera angles customized for an immersive multi-screen viewing experience. A live remix of the original multitrack 48-channel audio in L-ISA Immersive Hyperreal Sound, a groundbreaking ultra-high resolution audio technology from L-Acoustics, offers fans the thrill of connecting with the band’s repertoire in vivid fidelity. The 360˚ real time mix synced to on-screen footage and further complemented by a stunning light show promises to immerse the audience in a truly unique experience, for one night only in each city. The Seattle screening will be located at The Showbox, the same site the band reunited for the first time in 2010 under the anagram “Nudedragons.”

Tickets for the Soundgarden: Live from the Artists Den immersive events will go on sale later today, May 16th at 5PM EDT/2PM PDT at http://artistsden.com/soundgarden as an exclusive bundle which includes the 2-CD.

The Soundgarden: Live from the Artists Den immersive events and screening are being held at the following venues. For additional information, visit ArtistsDen.com.