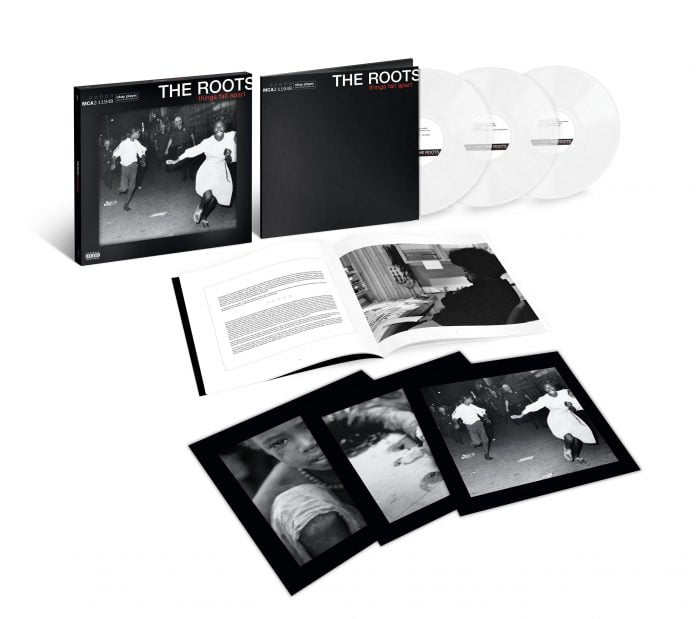 To celebrate the continuing cultural impact of The Roots, Geffen and UMe/Urban Legends will re-issue the bands’ iconic Things Fall Apart, Do You Want More ?!!??! and Illadelph Halflife to commemorate the anniversary of each album’s release.

This year marks the 20th anniversary of Things Fall Apart, with Do You Want More?!!!??! celebrating its 25th anniversary next year and Illadelph Halflife turning 25 in 2021. Each remastered re-issue will be drawn from the original master recordings, and Things Fall Apart will include bonus selections, rare photos, essays by Black Thought and Questlove and liner notes from Questlove.

“We’re looking forward to going back to the vault to revisit our original recordings from the studio and we’re excited to celebrate these albums by really delivering something special for our fans,” said The Roots.

Starting off the celebration will be The Roots’ breakthrough fourth album Things Fall Apart, available on September 27, 2019. This melancholy gem of 2000s alternative hip-hop, originally released on MCA Records in 1999, has been freshly remastered and re-pressed in two lavish triple vinyl configurations. The standard configuration features the original album, remastered on double vinyl with a third LP of bonus tracks curated by Questlove, including a 24-page booklet featuring rare images, retrospective essays by Black Thought and Questlove, track-by-track liner notes from Questlove. The Collector’s Edition features all of the above, but with clear vinyl and a die-cut slipcase with all 5 alternate covers as interchangeable lithos with foil stamp numbering. More information, including pre-order details, will be announced soon.

Do You Want More?!!!??!, The Roots’ second studio album, is the band’s major label-debut, coming two years after their independent debut album, Organix in 1993. The album is critically acclaimed as a classic of hip-hop jazz. Chicago Tribune music critic Greg Kot celebrated the group’s ability to “mate hip-hop wordplay, funk rhythms and jazzy textures” and calls the album “an impressive display of skills, intelligently arranged and performed.” In 1998, the album was selected as one of The Source’s 100 Best Rap Albums. The re-issue will be available in 2020.

Illadelph Halflife’s is the third studio album from The Roots. With contributions from artists across jazz and R&B including Amel Larrieux, D’Angelo, Steve Coleman, Graham Haynes, David Murray, and Cassandra Wilson, the album shows the immense growth of the band from their first two titles. Upon release, The New York Times music critic Neil Strauss recognized the album as “one of the year’s best rap offerings” and celebrated its “politically conscious lyrics.” Illadelph Halflife offered a fresh perspective on hip-hop. The album, which will be re-issued in 2021, has been recognized by The Source, The Village Voice, and Hip-Hop Connections as one of the 100 Best Rap Albums.