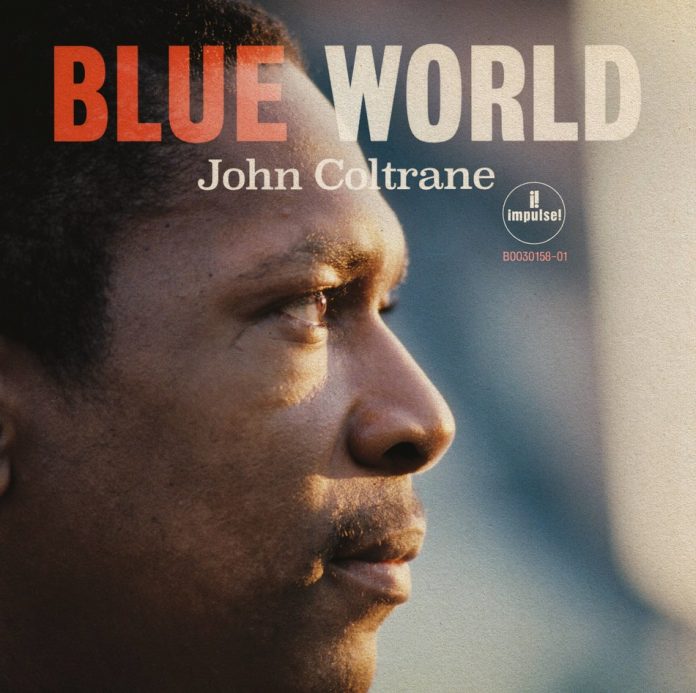 In 1964, John Coltrane and his Classic Quartet went into Van Gelder Studios and, in an unprecedented move for Coltrane, recorded new versions of some of his most famous works. This never-before-heard recording, Blue World, will be released on September 27 in CD, vinyl LP and digital editions.

Early in 1964, the year he recorded A Love Supreme, Coltrane was approached by a Quebecois filmmaker, Gilles Groulx. Groulx was planning his film Le chat dans le sac, a love story set in Montreal with political undertones. A die-hard Coltrane fan, Groulx was fixated on having Coltrane record a soundtrack for his film. Groulx approached Coltrane via a personal connection with bassist Jimmy Garrison, and amazingly, Coltrane agreed.

So right between the recording sessions for Crescent and A Love Supreme in June of ’64, John Coltrane brought Jimmy Garrison, Elvin Jones and McCoy Tyner into Van Gelder Studios to do something virtually unprecedented in Coltrane world: revisit and record earlier works.

Gilles Groulx was at Van Gelder, watching the session, listening. It’s unclear how much creative input the filmmaker had, and how much conversation happened between him and Coltrane, that yielded this rare kind of session. Recorded on 1/4″ analog mono tape, the session was mixed by Rudy Van Gelder at Van Gelder Studios on June 24, 1964. Groulx took the master to Canada to use in his film, although he only included ten minutes of the 37-minute recording.

Blue World has been mastered from its original analog tape by Kevin Reeves at Universal Music Mastering in New York. The new vinyl edition’s lacquers were cut by Ron McMaster at Capitol Studios.

Blue World reveals Coltrane’s personal progress, as well as the interactive consistency and sonic details the Classic Quartet had firmly established as their collective signature by 1964. This signature was so assured and dramatic, so buoyant and different from the sound Coltrane had delivered before. And it is significant that this recording session – whatever the ultimate driving force was – happened in between two of Coltrane’s most expansive, spiritually transcendent records that would set the tone for the rest of his musical career.

Blue World follows on the heels of last year’s global success Both Directions At Once: The Lost Album, a studio album recorded in 1963 that revealed new compositions from Coltrane and the Classic Quartet at their peak. Both Directions landed Coltrane at #21 on the Billboard Top 200 chart, his highest debut ever. The record easily topped jazz charts around the world and put Coltrane in the Top 20 on Overall Charts in the UK, France, Germany, Japan, Austria, Italy and more. Global sales to date for Both Directions has exceeded a quarter of a million albums sold worldwide.