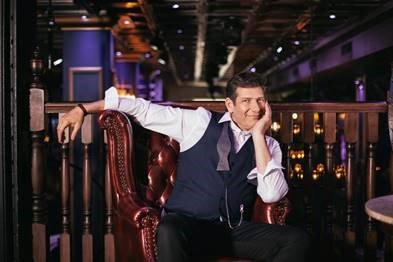 Canadian jazz music star and one of the country’s best-loved vocal coaches Micah Barnes has debuted at #1 on the iTunes Canada Jazz Chart with the first single ahead of his upcoming Vegas Breeze album, “That’s Life”, giving fans an early taste of the album and showcasing his imitable style.

Micah was recently featured in the new book, Bad Singer, as the vocal coach that made the author’s singing much, much better, and gave advice to the Toronto Star and BT in Vancouver on how to become a powerful singer – great advice for the older audience who just want to sing and the younger YouTube generation who are looking for success through social media.

A Juno-nominated recording artist, Micah is also one of Canada’s best-known vocal, performance and career strategy coach and recording artist whose own career has included #1 Billboard hit Welcome To My Head as well as recording and performing internationally with the popular a capella group The Nylons. Micah is currently touring the country with his own solo cabaret show in support of his latest release New York Stories.

When his last album, New York Stories was re-released, it immediately hit the #1 jazz position on iTunes and stayed there for over a month – unheard of for a Canadian album on their jazz charts these days.

And if THAT wasn’t exciting enough, Micah’s friend and client Tatiana Maslany recently took home the Emmy and Canadian Screen Awards for best lead actress in a drama for her multiple roles in the sci-fi series “Orphan Black.”

Micah is a top industry coach used by Managers, Labels, Producers and Directors in the Canadian and U.S. through his Singer’s Playground company. His coaching credentials include Andrew Lloyd Webber’s hit CBC TV show How Do You Solve A Problem Like Maria and the original cast of Tomson Highways The Rez Sisters. He has coached cast members of Mirvish’s The Sound Of Music and Broadways Pricilla Queen Of The Desert as well as pop artists such as So You Think You Can Dance Canada’s” Blake McGrath.