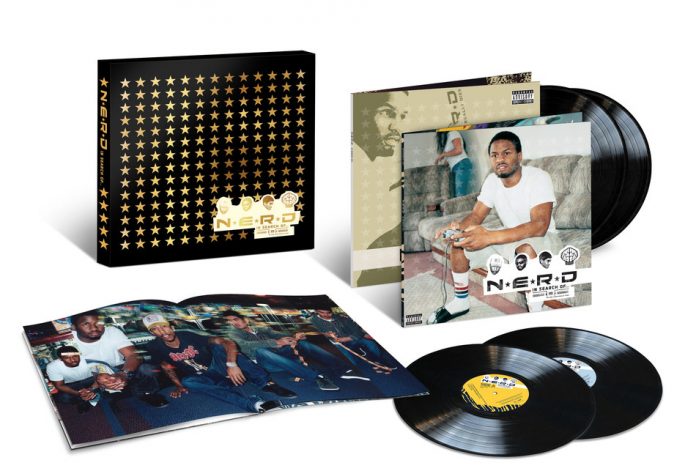 N*E*R*D’s debut album, In Search Of…, was first released in Europe on August 6, 2001. The album’s first edition featured mainly electronic instrumentation for its 13 tracks. On March 12, 2002, N*E*R*D released a new version of In Search Of… worldwide, with the original album’s electronic soundscape replaced by instruments played by funk-rock band Spymob. For the first time, In Search Of…‘s “electronic version” and “rock version” have been paired, for new deluxe 4LP vinyl set to be released October 25 by Virgin/Urban Legends/UMe. On the same date, An expanded deluxe digital edition for the album’s “electronic version” will be released. The new edition adds seven rare and previously unissued remixes and live tracks to the album, all of which are making their digital release debuts.

In Search Of…‘s first edition, also known as the “electronic version,” features drum machines and synthesizers for a sound more typical of N*E*R*D duo Pharrell Williams and Chad Hugo’s production work as The Neptunes. The album’s first edition also features an “Intro” track and three interstitial skits with the tracks “Things Are Getting Better,” “Stay Together,” and “Tape You.”

The album’s 12-track global “rock version” is sequenced differently and does not include the first edition’s “Intro” track or skits. Entertainment Weekly bestowed an A- review grade on the album’s “rock version,” saying the second edition “has a crackling vigor missing from the first stab, and its mélange of genres makes for music unlike anything else around.” Rolling Stone awarded it four stars, and MOJO also praised it, saying, “It is quizzical, troubled, socially concerned, compassionate, schizoid, retro-eclectic, strikingly modern, racially mixed–and even likes women.”

In Search Of… [DELUXE 4LP VINYL]

In Search Of… “Rock Version”

In Search Of… “Electronic Version”

Urban Legends is a multi-platform initiative that honors the past 30 years of Universal Music Group’s (UMG) urban catalog. The label imprint and platform, which came to fruition in late 2017, celebrates the artists and music at the heart and soul of hip-hop.

Nobody forgets the album that changed their life—that one song that defined the moment. Urban Legends remembers and reimagines what it means to be a fan, helping music lovers fall in love with their favorites all over again. We celebrate our icons, our culture, our style, our legacy, our music—and why it matters.

Visit http://www.urbanlegends.com/ or find them at: