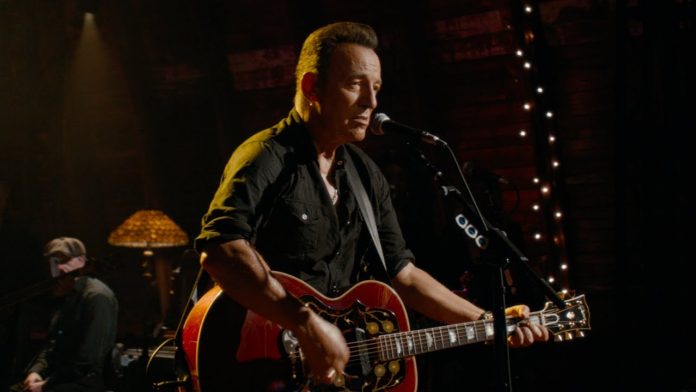 On the heels of the successful world premiere of Bruce Springsteen’s “Western Stars” at the Toronto International Film Festival, Fathom Events announces that it will bring music legend Bruce Springsteen to cinemas across America in an exclusive two-night theatrical release of “Western Stars.” The Fathom screenings, which will be held on October 19 and 23, will also feature an exclusive look behind the scenes with Springsteen, including never-before-seen archival footage and previously unreleased music from the Springsteen vault.

“Western Stars,” the cinematic film version of his latest globally successful album, was directed by Thom Zimny, his longtime collaborator, and Springsteen, marking his directorial debut. Following the Fathom events, “Western Stars” is slated for release on October 25, 2019.

From Fathom Events and Warner Bros., this special two-day event will premiere in cinemas nationwide on Saturday, October 19 at 7:00 p.m. and Wednesday, October 23 at 4:00 p.m. and 7:00 p.m. (all local times). For a complete list of theater locations, visit the Fathom Events website (theaters and participants are subject to change).

“Western Stars” offers Springsteen fans across the country a unique opportunity to see him perform all 13 songs from the critically lauded album—his first studio album in five years. Touching on themes of love and loss, loneliness and family and the inexorable passage of time, the documentary film evokes the American West—both the mythic and the hardscrabble—weaving archival footage and Springsteen’s personal narration with song to tell the story of Western Stars.

In a first for Springsteen, his rendition of the album is backed up by a 30-piece orchestra and set under the cathedral ceiling of his own historic nearly 100-year-old barn.