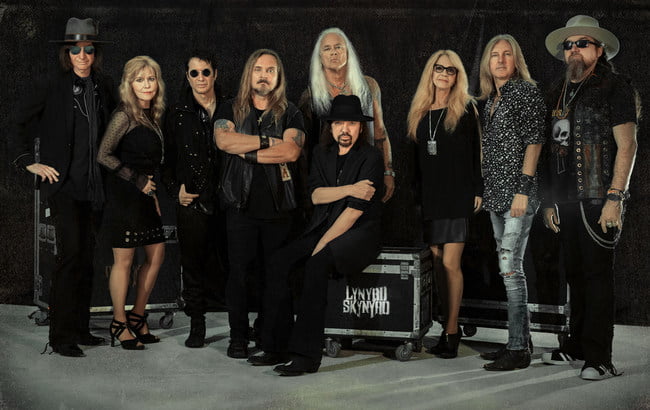 On November 7, Fathom Events will bring the legendary southern rock band Lynyrd Skynyrd to cinemas around the country with the exclusive theatrical release of their farewell concert performance. The concert film, directed by multi award-winning director Shaun Silva and Tacklebox Films, will feature their 2018 hometown stadium performance from the “Last of the Street Survivors Farewell Tour” at TIAA Bank Field (Home of the Jacksonville Jaguars) in Jacksonville, Florida, as well as an intimate interview with the band about their experiences on tour and what performing together has meant to them.

“We can’t wait to share this amazing night and performance with the Skynyrd Nation, especially those that weren’t able to be there that evening,” said Gary Rossington. “The energy, passion and reaction to the music and band was something we will never forget.”

Presented by Fathom Events, in partnership with Vector Management and event producer Spencer Proffer of Meteor 17, this special one-night event will premiere in cinemas nationwide on Thursday, November 7, at 7:00 p.m. local time. A complete list of theater locations will be available October 4 on the Fathom website (theaters and participants are subject to change). Fathom Events has also obtained the global distribution rights to the content, with more details to come about international screenings, including dates and locations.

Last year the Southern Rock icons announced that after a career that has spanned more than 40 years and includes a catalog of more than 60 albums with more than 30 million units sold, they would embark on their Last of the Street Survivors Farewell Tour. Produced by Live Nation, the farewell tour logged over 50 stops by the end of 2018 and has continued throughout 2019 taking the band across the country and around the globe giving fans one last unforgettable night of classic American Rock-and-Roll.

“This cinema event showcases one of America’s greatest rock bands in an iconic final performance,” said Meteor 17 CEO, Spencer Proffer. “I’m excited to collaborate with my partners at Fathom and Vector to bring this milestone concert to Lynyrd Skynyrd fans around the world.”

“Having the band come home, one last time to Jacksonville and in front of 50,000 fans, was an incredible night,” said Ross Schilling of Vector Management. “Those iconic songs and music prove once again that Skynyrd is one of the greatest American Rock and Roll bands of all time.”

“We’re thrilled to bring one of America’s most iconic bands to movie theaters across the country and give their many fans an opportunity to come together and enjoy one of their final performances,” said Fathom Events CEO Ray Nutt. “This is a historic moment in music, and we are excited to collaborate with Meteor 17 and Vector to once again bring a momentous music performance to a worldwide audience.”