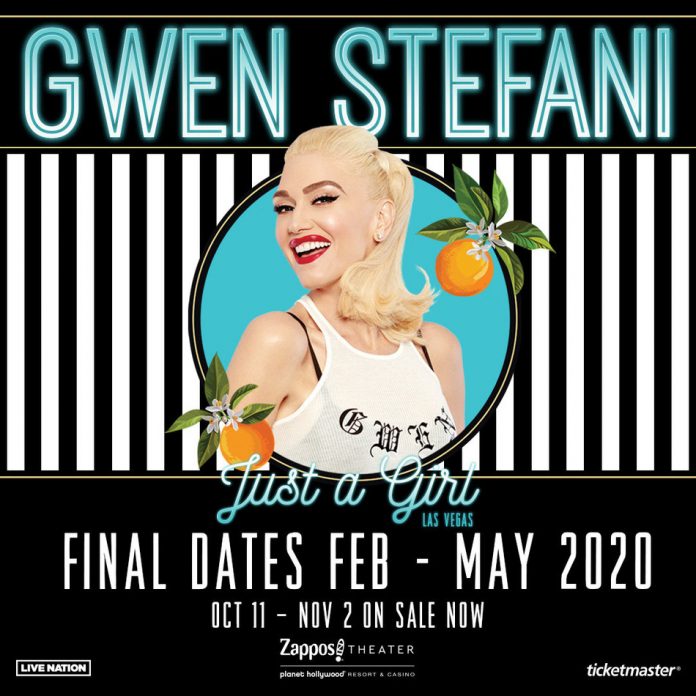 Designed exclusively for Zappos Theater and promoted by Live Nation and Caesars Entertainment, the eye-popping spectacular celebrates the breadth of the star’s illustrious musical career with fan-favorite hits, including “Hollaback Girl,” “The Sweet Escape” and “What You Waiting For?”

The final 16 performances going on sale are:

A limited number of tickets and VIP packages are available for the following previously-announced performances:

Gwen Stefani, Live Nation Las Vegas and Caesars Entertainment are donating $1 of every ticket purchased to “Gwen Stefani – Just A Girl” at Planet Hollywood Resort & Casino to Cure 4 The Kids Foundation, a Las Vegas-based nonprofit organization that provides medical treatment to children facing a number of life-threatening conditions. The donation will also allow Cure 4 The Kids Foundation to move into a state-of-the-art building, increasing the number of exam rooms and improving the patient treatment experience. In addition to support of the expansion, Cure 4 The Kids worked with Stefani to design and name a patient room after her within the existing clinic space, which was unveiled in March 2019.

A three-time GRAMMY® Award winner, Gwen Stefani has achieved global success as a performer, songwriter, frontwoman for iconic rock band No Doubt, and multi-platinum solo artist. To date, she’s sold more than 50 million units worldwide, including her five-times-platinum debut solo album Love.Angel.Music.Baby. — a 2004 release delivering the hit singles “Rich Girl,” “What You Waiting For?,” and the Pharrell Williams-produced No. 1 hit “Hollaback Girl.” With her 2006 sophomore album The Sweet Escape featuring the Billboard Hot 100 top-ten smash “Wind It Up,” Stefani most recently released her third solo effort This Is What The Truth Feels Like. Debuting at No. 1 on the Billboard 200, the critically praised album includes her powerful No. 1 single “Used To Love You.”

In addition to her three GRAMMY® Awards, Stefani’s honors include four MTV Video Music Awards, two Billboard Awards, an American Music Award, and a Brit Award. In 2014, she channeled her tremendous musical passion into empowering young singers as their coach on the seventh season of NBC’s musical competition series “The Voice.” Stefani now returns for her fourth season as a coach on “The Voice,” with the 17th season of the four-time Emmy Award-winning show arriving in September 2019.

Known for her wildly charismatic stage presence, Stefani premiered her exclusive Las Vegas headlining residency “Gwen Stefani – Just A Girl” in June 2018 at Zappos Theater at Planet Hollywood Resort & Casino. With its set list comprised of fan favorites and iconic hits, the two-hour show unfolds as an eye-popping spectacular, putting a fresh twist on classic Vegas theatrics. But despite the elaborate stage production — and wardrobe changes showcasing her legendary fashion sense — Stefani offers up an undeniably intimate performance, ultimately forging an unforgettable connection with the crowd.

One of pop culture’s most magnetic style icons, Gwen Stefani has also emerged as the first global celebrity artist to translate music stardom into a series of massively successful lifestyle brands. Through her fashion line L.A.M.B., its sister label Harajuku Lovers, and her eyewear line gx by Gwen Stefani, the designer and entrepreneur has brilliantly merged modern glamour with fashion-forward streetwear. L.A.M.B. and gx eyewear is available in over 3000+ doors in the United States. Harajuku Lovers, the pop-art-inspired apparel and accessories brand, has had broad appeal with collaborations including the award-winning Harajuku Mini for Target and beauty accessories for Sephora. Target is celebrating 20 years of their groundbreaking Design For All program and are bringing back 20 of their favorite and most iconic designer partnerships including Harajuku Mini. The Limited Edition Harajuku Mini Anniversary Collection is available at Target stores and Target.com now.

With over $1 billion in retail sales across all brands to date, she recently took the helm as co-creator and executive producer of “Kuu Kuu Harajuku”: a children’s animated TV show now in its third season on Nick Jr., fulfilling Stefani’s mission of providing young girls with content that celebrates creativity, imagination, and fearless individuality.