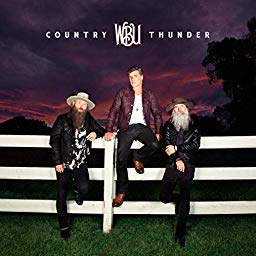 2019 has been a monumental year for The Washboard Union.

The year could not have been scripted any better: two wins at the CCMA Awards – including Group or Duo of the Year for the second consecutive year – and becoming the first country band to ever win the Juno Award for Breakthrough Group of the Year; playing to over 200,000 fans from coast to coast in Canada, plus shows in France, Spain and the U.S.; and becoming staples at Canadian radio with a continuous flow of high-charting singles.

Today, the country trio opens a new chapter with the release of a brand new single, “Country Thunder.”

“After walking out of this writing session, we all had this elated feeling like we had written something really special. When the three of us woke up the next morning singing it, we knew that was a pretty good sign that we were right,” says The Washboard Union. “We love this song and hope our fans will love it too.”

Since their inception in 2016, road warriors and country radio stalwarts The Washboard Union have the well-earned reputation as Canada’s preeminent country band with a growing international footprint. They continue to be one of the most exciting, recognizable and talked about bands on the country music scene.  Best friends Aaron Grain, Chris Duncombe and David Roberts share an unbridled love for the art of songwriting and storytelling that has resonated with audiences from North America to Europe, performing in front of over 200,000 fans in 2019 in Canada, France, Spain and the U.S.  Their music and dynamic live performances have set them apart as one of the most unique talents in country music today. They are the 2-year-reigning Group of the Year at the CCMA Awards and winners of the Juno Award for Breakthrough Group of the Year, bringing their career music award total to 27 wins.