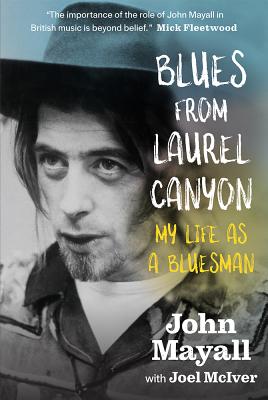 John Mayall has played with them all; Eric Clapton, Peter Green, Jack Bruce, Mick Fleetwood, Mick Taylor, Andy Fraser… the list goes on. Now, in his 80’s, John continues to tour all over the world and perform to sell-out crowds. With an incredible blues career spanning over sixty years, which rightly earning him the title “The Godfather of British Blues,” John shares his experiences and encounters in what will be a must read autobiography for any true blues fans.

For over 50 years, John Mayall has served as a pioneer of blues music, rightly earning him the title, “The Godfather of British Blues.” In 2013, John signed with producer Eric Corne’s label, Forty Below Records, and has since been experiencing a true artistic and career renaissance, including a Blues Hall of Fame induction in 2015. Joel McIver is a British author. The best-known of his books is the best-selling Justice For All: The Truth About Metallica, first published in 2004 and appearing in nine languages since then. McIver’s other works include biographies of Black Sabbath, Slayer, Ice Cube and Queens Of The Stone Age, all published by Omnibus Press.