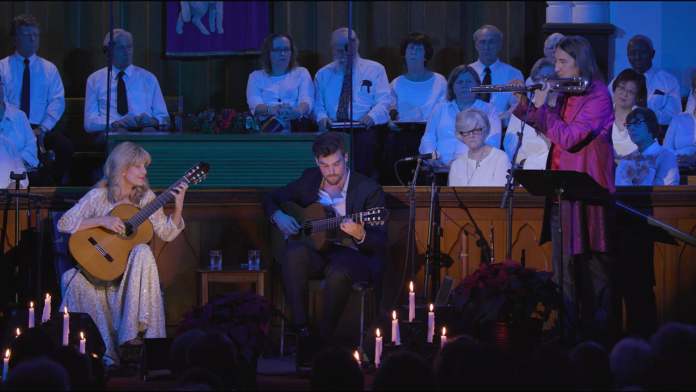 The special is now also available to stream in Canada on CBC GEM.

World-renowned classical guitarist, Liona Boyd and her protégé, Andrew Dolson perfectly capture a magical evening in the concert A Winter Fantasy airing at on WNED-TV and several other PBS stations. WNED Airdates are Dec 16th at 10:00pm and Dec 25th at 1am.

Ever since her platinum album, “A Guitar for Christmas,” Boyd’s music has been part of the holidays. A Winter Fantasy is a one-hour concert film that interweaves beloved traditional pieces, such as “Silent Night” and “The Huron Carol,” with Boyd’s own original material and the ethereal orchestrations of Peter Bond. Dolson accompanies Boyd on guitar and vocals as well as giving soaring operatic vocal renditions of “O Holy Night” and Boyd’s own epic “Aurora Borealis,” a tribute to the beauty of the northern lights.

Recorded in historic Richmond Hill United Church, A Winter Fantasy also features special guest, Grammy nominated flautist Ron Korb, as well as the Chancel Choir of Richmond Hill. Korb adds his acclaimed playing on two pieces, and The Chancel choir joins along with the exuberant Caribbean rhythms of “Christmas Dreams” to close out this special concert. Stunning winter scenery from Boyd’s homeland of Canada add visual beauty to the production.

A Winter Fantasy brings Boyd’s unique blend of romantic style and serene classical guitar music to the screen. A Winter Fantasy, the album is available around the world on iTunes, Spotify and in stores across Canada. The audiobook of Liona’s best selling autobiography In My Own Key, read by the author, is also available now on audible.com and audible.ca