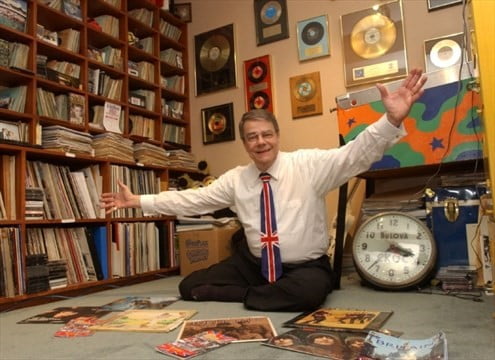 Canadian Music Week is pleased to announce that Nevin Grant of CKOC is to be inducted into the Canadian Broadcast Industry Hall of Fame, and will be the recipient of the Allan Waters Lifetime Achievement Award.

Music director of CKOC from 1968 until his retirement in 2003, Nevin is recognized as one of the top music programmers in Canada. He is an avid record collector, with his massive collection containing over 15,000 45 RPM singles alone. “I became a serious collector of 45 rpm recordings in the mid-Fifties. I tried to collect every hit single… I’d also buy any recording I really liked, whether a hit or not.”

His reputation as “The Hitmaker” was solidified over his 37-year career at CKOC. He was known for breaking new hits, and his knack for finding the latest and greatest in pop music was a huge part of CKOC’s success. After graduating in Radio and Television Arts from Toronto’s Ryerson University, Nevin started at CKOC in 1966 as a copywriter and became Creative Director, Music Director, Assistant Program Director then Program Director.

Following his retirement from CKOC in 2003, Nevin also became an author, offering his insightful recollections on the music, times, books, movies, fads, fashions and pop culture icons of 1955-1989 in his book Growing up with the Hits!: Reliving The Best Time of Your Life – 1955-1989.

Neill Dixon, president of Canadian Music Week and producer of the awards, says: ”We are very pleased to announce the induction for Nevin Grant. There’s a personal connection here, He always had time for the “record guys” dropping off vinyl 45’s to the station including myself as newbie RCA rep. back in the day.”

Jim Waters adds “I can’t think of a more deserving recipient of this prestigious award, which is presented in recognition of Nevin’s extraordinary contribution to the broadcast industry.”

Nevin Grant will be honoured at the 2020 Canadian Music and Broadcast Industry Awards on May 21st, 2020 at the Bluma Appel Theatre (St. Lawrence Centre for the Arts.)