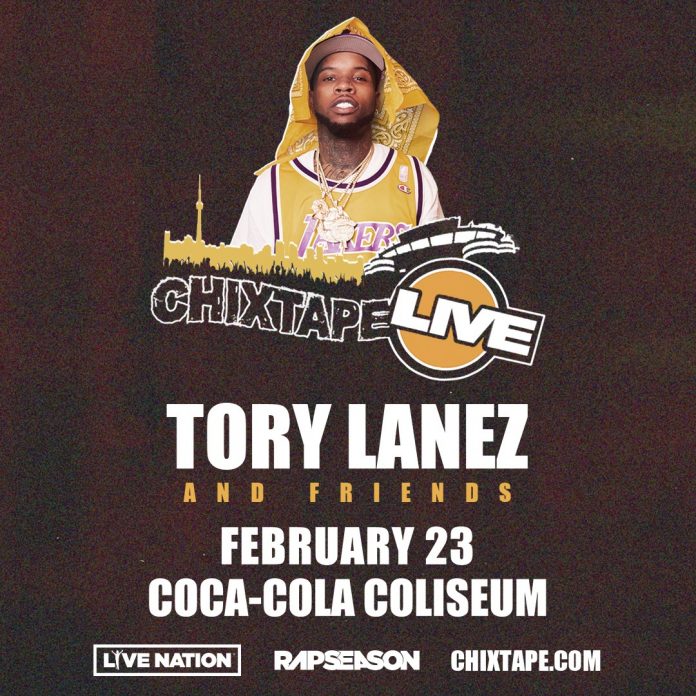 Coming off the high of his recently released album, Tory Lanez announces three live shows in Los Angeles, New York and Toronto. The shows will feature performances from his hit album Chixtape 5 plus other fan favorites from his catalog of chart topping hit music. Tickets go on sale Friday, December 20.

Chixtape 5 peaked at #1 on the Apple Music charts while the lead single “Jerry Sprunger” amassed over 40 million streams globally across all platforms. The project as a whole has over 195 million streams to date. Chixtape 5 is the fifth installment in the series by the Grammy Award-nominated and multi-platinum recording artist, and is the first to be available on all streaming platforms. It features hits from the early 2000’s era including samples and features from Jagged Edge, Jermain Dupri, T-Pain, Snoop Dogg, Chris Brown, Ludacris, The Dream, Mya, Mario, Trey Songz, Ashanti, Lloyd, Lil Wayne, Fabolous and Slim of 112 all of which Lanez will be performing at each show.

Tory Lanez is the definition of a triple threat. A rapper, singer and producer, Lanez originally stepped onto the music scene with the release of fan favorite mixtapes such as Sincerely Tory, Lost Cause and Cruel Intentions. After signing to Interscope Records in 2015, his debut album, I Told You peaked at #4 on the Billboard 200 Chart and featured the certified double platinum single “Luv” and 3x platinum “Say It.” With a slew of additional mixtape projects including Chixtape and The New Toronto series as well as his sophomore album Memories Don’t Die (which peaked at #3 on the Billboard 200 chart), Lanez continued to create hit after hit. His third album LoVE mE NOw, released in October 2018, took over the Billboard Rap Chart to become the #1 album in the country. 2019 brought even more success as Lanez toured the UK with Drake for the Assassination Vacation Tour and joined forces with Chris Brown for the IndiGOAT Tour to wrap up the summer. Never one to be labeled or confined to a box, Lanez will be showcasing his versatility with a Latin project titled El Agua. To close out 2019, Lanez also released his highly anticipated album Chixtape 5, which put his artistic twist on some of the biggest hits of the 00’s and featured a few of the most iconic artists of that time period including “Jerry Sprunger,” a sample of T-Pain’s (who is also featured on Lanez’ version) hit record “I’m Sprung” . With countless platinum singles on his resume, Tory Lanez continues to be an artist that breaks the mold and leaves fans wanting more.