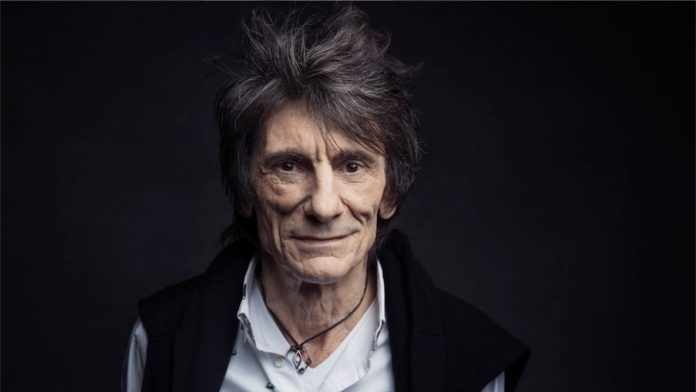 ‘Somebody Up There Likes Me, the first in-depth film biography of Ronnie Wood was released to cinemas around the UK and Ireland in November, 2019, and should be on your fave streaming service any moment now.

Ronnie Wood – artist, musician, producer and author. Yet, there is so much more to know about the man himself. This intimate portrait traces the lives and careers of one of the most important guitarists in rock music, capturing what it means to be such an iconic presence. Since he bought his first Rogers electric guitar for £25 over 55 years ago, Ronnie Wood has been at the centre of rock ‘n’ roll, his electrifying and timeless style a key part of British music history.

Ronnie Wood said, “When my mate (acclaimed director) Mike Figgis approached me to make this documentary film I was baffled where to start and where to finish …Oh well, how about from being born into the Wood dynasty to where I am right now! That should do it … The title says it all, hope you enjoy watching it as much as we did making it. “Leave ‘em wanting more”, as the man said, so look out people, there’s a lot more stories to be told.”

Interspersed with dazzling vintage performance footage of The Jeff Beck Group, The Faces and the Rolling Stones, ‘Somebody Up There Likes Me’ traces Wood’s life from his upbringing in West London, where his father Arthur would fall asleep in neighbours’ gardens as Wood and his two brothers often awoke to find “characters draped over the furniture” who Arthur had brought home from the pub.

Made over two years for Eagle Rock Films, the documentary features brand new interviews with Wood’s Rolling Stones bandmates Mick Jagger, Keith Richards and Charlie Watts, as well as his Faces bandmate, Rod Stewart. Other interviewees include Wood’s wife Sally Wood, singer Imelda May and artist Damien Hirst. Hirst reminds viewers how Wood is one of the few musicians to have a respected alternative career as a painter. He says, “Ronnie is a dab hand – he can paint better than me.”

While Figgis’ film is sympathetic to Wood, it doesn’t shy away from his hardships. He talks openly about his battles with drink and drugs, speaking honestly about overcoming his freebase addiction as well as beating lung cancer.

Mike Figgis said, “Music has always been central to the way I approach filmmaking. Working with Ronnie on ‘Somebody Up There Likes Me’ was a great opportunity to explore the roots of the UK Blues and Rock scene, something I had begun in 2002 with Red White and Blues, the Martin Scorcese produced history of the British blues scene, The bonus was Ronnie himself. A multi-talented storyteller, artist and musician. His candour and warmth was always present as he talked about the highs and the lows of his career thus far.”

‘Somebody Up There Likes Me’ takes its title from Wood surviving his chronic smoking habit, as he says: “When they operated on my cancer, they took away my emphysema. They said my lungs were as if I’d never smoked. I thought: ‘How’s that for a Get Out Of Jail Free card?’ Somebody up there likes me, and somebody down here likes me too.”

Throughout, footage of Wood playing guitar and harmonica is a reminder of a versatile instrumentalist, while he also thoughtfully and skilfully paints in his studio. ‘Somebody Up There Likes Me’ is a new look at Ronnie Wood – a rewarding and always compelling insight into one of music’s most likeable, successful but complex key players.