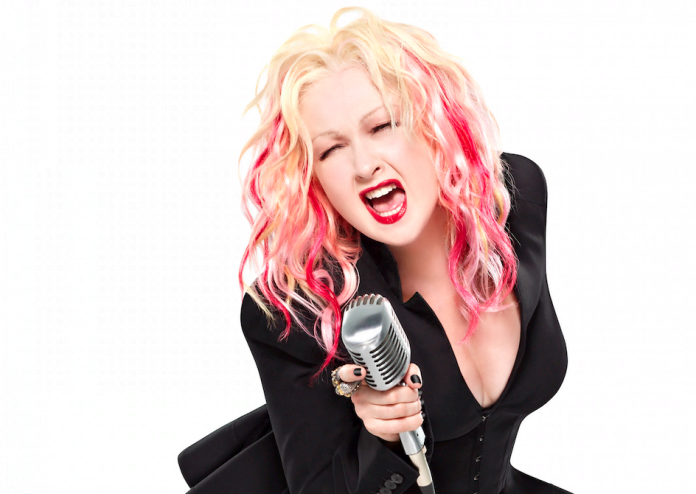 Award-winning recording artist, composer, lyricist, and advocate Cyndi Lauper has been named the first recipient of The High Note Global Prize, an award honoring and celebrating major recording artists for outstanding achievement in using their music and celebrity platform to advocate for social justice worldwide.

On UN Human Rights Day, which is December 10, The High Note Global Prize will be presented to the iconic pop star by UN Human Rights along with international singer-songwriter and social activist Kesha at Cyndi Lauper’s “Home for the Holidays” benefit concert in Los Angeles at The Novo at L.A. Live. UN Human Rights is the “Global Partner” of The High Note Global Initiative founded by David Clark, a renowned creator of cause-brands and humanitarian initiatives for President Nelson Mandela, Muhammad Ali, Prince, United Nations, Amnesty International, and The Anne Frank Center, among others.

Ms. Lauper is being recognized for her lifelong advocacy for equal rights for lesbian, gay, bisexual, transgender, queer and questioning (LGBTQ) people, as well as the significant achievements made by True Colors United, a nonprofit organization she co-founded in 2008 to prevent and end youth homelessness among LGBTQ youth. In May 2015, her testimony to the U.S. Senate Sub-Appropriations Committee on Transportation and Housing and Urban Development played a leading role in securing approximately $250 million in new annual federal funding over the past four years to invest in preventing and ending youth homelessness in over 70 communities across America. Each year, 4.2 million youth and young adults experience some form of homelessness in the United States and up to 40% of which are LGBTQ.* True Colors United develops and implements innovative solutions to youth homelessness that focus on the unique experiences of LGBTQ young people through a wide array of training and education, technical assistance, advocacy, and youth collaboration programs. The organization has impacted the lives of millions of LGBTQ youth and brought the critical issue of youth homelessness to the forefront of government, public, and media awareness.

“We are proud to support The High Note Global Initiative in an effort to galvanize global mobilization for human rights, and at the same time honor artists who passionately use their work to promote and protect the rights of others,” said Laurent Sauveur, Chief External Outreach, UN Human Rights.

“The GRAMMY Museum is thrilled to support The High Note Global Initiative, which is working to celebrate and highlight musicians who impact society through the promotion of social justice,” said Michael Sticka, President of the GRAMMY Museum. “Cyndi Lauper is most deserving as the inaugural recipient of The High Note Global Prize for her decades of continued work to support the LGBTQ community.”

The Office of the United Nations High Commissioner for Human Rights (UN Human Rights) has a unique mandate to promote and protect all human rights for all people. Under the leadership of the High Commissioner, with a staff of 1,300 working in more than 70 countries, it aims to make human rights a reality in the lives of people everywhere. Its flagship campaign “Free and Equal” is a call to stand up for the rights of LGBTI people across the globe.

Cyndi Lauper is a groundbreaking Grammy, Emmy, and Tony Award-winning songwriter and performing artist with global record sales in excess of 50 million. Her iconic voice, influential punk glamour, and infectious live shows have catapulted her to stardom. Lauper won the Grammy Award for Best New Artist with her first album, She’s So Unusual, and became the first woman in history to have four top-five singles from a debut album. Since then, Lauper has released ten additional studio albums, yielding timeless classics like “Time After Time” and “True Colors,” and the anthemic “Girls Just Wanna Have Fun.” She’s been nominated for 15 Grammy Awards, two American Music Awards, seven American Video Awards, and 18 MTV Awards. In 2013, Cyndi Lauper became the first solo woman to win Best Original Score (music and lyrics) for Kinky Boots. She contributed a Tony-nominated song to the score of the Broadway musical SpongeBob SquarePants and is currently writing the score for the Broadway adaptation of the 1988 feature film Working Girl. A pillar of female success, Lauper was inducted to the Songwriters Hall of Fame in 2015, released a New York Times best-selling memoir, and continues to collect impressive accolades across the music industry and beyond. In 2019, “She’s So Unusual” was honored for its cultural, historical, and aesthetic importance by being inducted into the Library of Congress’ National Recording Registry. In addition, Lauper is tireless in her advocacy work. She has been an activist since day one, always fighting for the underdog – especially women, people living with HIV/AIDS, and LGBTQ people. Her commitment runs so deep that she started her own charity, the True Colors United in 2008 to bring an end to homelessness amongst LGBTQ youth.