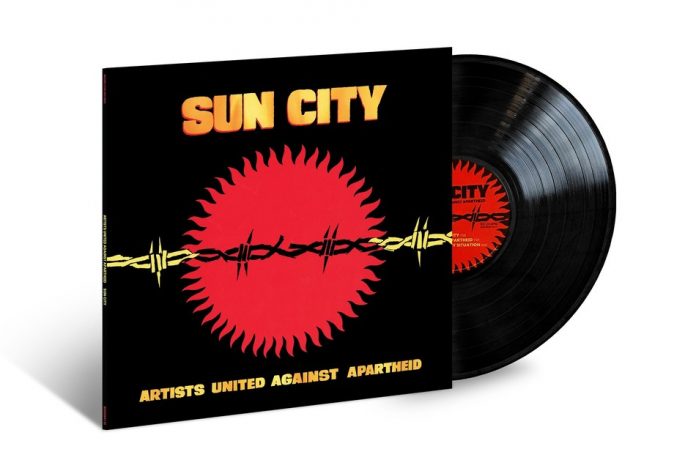 Little Steven, aka Steven Van Zandt, is commemorating today’s 30th anniversary of Nelson Mandela’s historic release from a South African prison after 27 years in captivity with the announcement that his 1985 landmark protest album, Sun City, by Artists United Against Apartheid, the extraordinary supergroup brought together by Van Zandt, producer Arthur Baker and journalist Danny Schechter to fight racial injustice in South Africa, will be released on vinyl for the first time since its initial release 35 years ago. The long-out-of-print LP joins five additional classic albums from Van Zandt making all of Little Steven’s records from his early career once again available on vinyl.

The upcoming releases, previously only available in last year’s limited edition box set, RockNRoll Rebel – The Early Work, and now available individually, have all been remastered and include all of the Rock & Roll Hall of Famer’s solo records between 1982 and 1999: Men Without Women (1982), Voice Of America (1983), Sun City (1985) Freedom – No Compromise (1987), Revolution (1989) and Born Again Savage (1999). Releasing March 13 via Wicked Cool/UMe, all albums will be available on both 180-gram black vinyl and as a special, limited edition version on 180-gram color swirl vinyl mirroring the psychedelic platters released in the box set. The color vinyl variants can be purchased exclusive at uDiscover. Pre-order your copy now: https://UMe.lnk.to/LSVZCareerVinyl

Notably, Revolution will be making its individual US vinyl debut, having previously only seen vinyl release in Europe, while the 2LP Born Again Savage will be available individually on vinyl for the first time ever.

Sun City proved a critically acclaimed and globally important work for both its powerful social message – allowing Van Zandt, Baker, and others involved in the project to donate more than a half million dollars to causes supporting the anti-apartheid struggle – as well as its innovative, world-spanning musical approach, ultimately earning inclusion in Rolling Stone‘s “100 Best Albums of the Eighties,” which noted “Sun City threw an effective political punch: Not only did it discourage musicians from playing the South African resort city, but it also helped spread the word about new sounds like rap.” Van Zandt is donating all artist and publishing royalties from Sun City to the Rock and Roll Forever Foundation for the TeachRock.org music history curriculum.

“It took courage for artists to make the leap from social concerns to political action for a cause that was virtually unknown at the time,” said Van Zandt. “Victories that clear cut are rare in the sphere of international liberation politics. Once in a lifetime if you’re lucky.”

“It’s been a blast going through the archives and finding all these hidden gems,” says Van Zandt. “In addition to demos in various stages of completion, there are entire songs I’d completely forgotten about, and we found some really early things pre-Jukes like Southside Johnny and the Kid (The Kid being me!). I’m excited to have my stuff back on vinyl for the first time in decades!”

All six albums included in RockNRoll Rebel – The Early Work are also now available digitally as individual Deluxe Editions, expanded with the same rare and unreleased material from the era that make up the four discs of rarities in the physical collection. The Early Work, a special digital-only collection compiling 10 previously unreleased tracks of early rehearsals and live performances with Southside Johnny and the Asbury Jukes spanning 1973-77 and capped off with a 1995 live performance of The Temptations’ “I Wish It Would Rain,” is also now available. Also now available digitally is the rare 1985 three-song 12″ EP, Let Me See Your I.D., featuring the Extended Mix, Street Mix and Beat and Scratch Mix of the landmark “Sun City” single. All albums can be streamed/downloaded below:

In addition, a limited edition standalone 144-page, 12″ x 12″ companion book is in the works featuring Van Zandt’s in-depth liner notes for RockNRoll Rebel, alongside memories and stories about the making of each album, lyrics to every song, and hundreds of never-before-seen photos. Pre-orders will be available soon.

Little Steven and the Disciples of Soul recently wrapped up two years of near constant touring – totaling 187 shows across North America, Europe, and Australia – with an epic performance at New York City’s historic Beacon Theatre, bringing the back-to-back Soulfire/Summer Of Sorcery world tours to an end with a suitably triumphant concert filmed for future release.