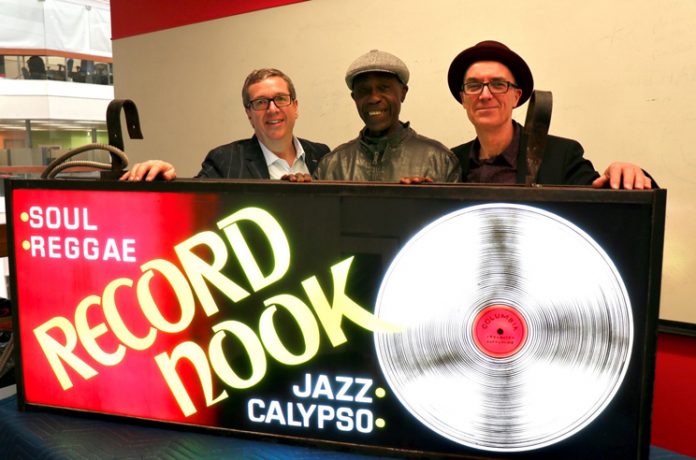 Another iconic sign from Toronto’s musical past will be part of the Toronto Neon Museum collection: the double-sided sign from the legendary Record Nook. The sign was found for sale at a west-end antiques store early this year and rescued by the Downtown Yonge BIA before it fell into the hands of a private collector.

“The discovery and preservation of the Record Nook sign is a big win for cultural heritage in the city,” says Downtown Yonge Chief Operating Officer and Executive Director Mark Garner. “Like the iconic Sam the Record Man sign, it is an important relic from our past and a priceless artifact – a reminder of the major role Toronto played in reggae music history and Jamaican culture.”

The Record Nook sign, which measures 5’ x 3’ x 1’, originally hung outside the store at 1400 Bathurst Street, just below Vaughan Road. The store was owned and operated by Jamaican-born reggae legends Jackie Mittoo and Lord Tanamo, who used it as an outlet for their friend Clement ‘Sir Coxsone’ Dodd’s recordings.

Specializing in Studio One vinyl albums and singles, the Record Nook became a popular hub for Toronto’s sizeable Jamaican community.

“In the 1970s, Toronto had the world’s biggest reggae scene outside of Kingston, Jamaica, with stars like Jackie Mittoo, Lord Tanamo, Leroy Sibbles, Stranger Cole, Ernie Smith, Carlene Davis and others all making their home here,” says Garner. “The Record Nook was significant as both a retail store and a popular gathering place, almost like a kind of community centre for Jamaicans living here.”

The Record Nook sign joins the dazzling artifacts being collected and curated for the Neon Museum Toronto currently in development. Downtown Yonge has been working for five years to establish a permanent home for the neon signs that once lit up Toronto streets. A Neon Museum Toronto management board is now in place and is developing plans to install the collection in pop-up spaces, laneways and in a permanent location.

This Record Nook sign acquisition has been in partnership with the Neon Museum Toronto, the Toronto Music Museum and the existing Friar’s Music Museum (in the Yonge-Dundas Shoppers Drug Mart). It could be on display as part of the next exhibit, supporting the Downtown Yonge BIA’s Music Strategy.