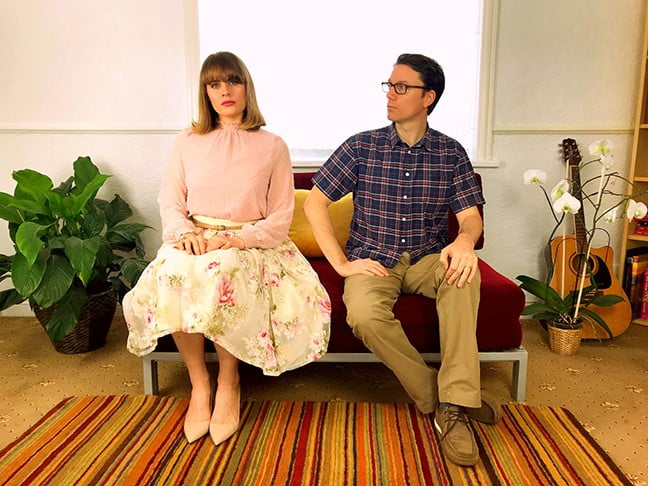 Breakout art-folk-pop duo The Temporary Residents embody sounds from every corner of multiple genres and decades, and in this — their new single “Unity” — they even pull from the outer galaxies as well.

“The sound of ‘Unity’ will take you on a journey through the multiple layers of the universe,” vocalist Yulia Hayden offers.

Their goal, they explain, was to round seriously powerful vocals up in a lyrical lasso before letting them sonically expand to the other side of the universe. “Like they’re calling out to reunite with the celestial family.”

There was very pointed inspiration for the track’s direction, namely Tears For Fears’ 1985 mainstay, “Shout.”

“During the production of this song, we knew we wanted to create the biggest sonic soundscape possible,” they share. “After hearing it on the radio in Jersey, ’Shout’ seemed like a good reference point.

“From there, we worked with our producer to make that similar kind of sound — expansive, larger than life, almost — but with a more contemporary feel to it.”

Released this spring, audiences are instantly receptive, with Dr Johns Surgery Records Radio pointing out its “dark but not emotional” vibe, adding that “the feeling in the vocal is excellent, the mix is spot on… Captivating, to say the least.”

“Unity” shows where The Temporary Residents are as of now, but as far as origin stories go, this is far more textured than ‘girl meets boy.’

While they met in London, England during work on a human rights awareness campaign, Patrick and Yulia are originally from Jersey in the Channel Islands and Kyrgyzstan, respectively.

Patrick — whose father was a well-established movie producer — was drawn to the creative field at a young age; having moved to London to pursue music, he previously studied Fine Art in Liverpool, specializing in painting and drawing.

Yulia was equally immersed in the arts from a young age, singing, dancing and performing on stage before moving to The Netherlands to take up acting. There she received a Dutch Award nomination for her role in the film, Katia’s Sister before moving to New York City to study at the T. Schreiber Studio & Theatre.

As they describe it, they share a “contempt for political correctness, but neither do (we) vote.” They’re confident they can illustrate the world’s injustices through music.

“We live in times where the truth remains elusive, and misinformation, disinformation, and lies are pushed at us from a multitude of sources,” they say. “We in our music seek to be honest and, at times, even expose falsehoods that are promoted widely.

“Our inspiration is rooted in traditional values, and we reject the postmodern ideology of struggle.”