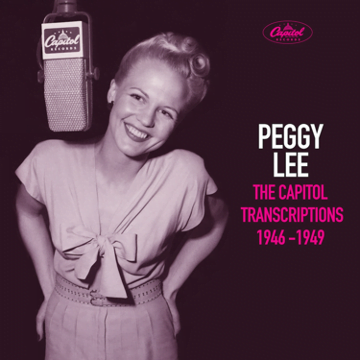 The centennial celebration of Peggy Lee’s birth—May 26, 1920—continues to be commemorated with new music releases and the airing of an updated documentary. Honoring one of the 20th century’s most important musical influences in the world of jazz and popular music, the Peggy Lee Estate today announces the digital-only release of The Capitol Transcriptions 1946-1949, and the airing of an updated edition of Fever: The Music of Peggy Lee in partnership with American Public Television.

One of the most important musical influences of the 20th century, Peggy Lee wrote over 250 songs, recorded over 1,100 masters, and had over 100 chart hits throughout her seven-decade career. As one of the world’s first female contemporary singer-songwriters, she co-wrote and sang many of her own hits, most notably “He’s A Tramp” for Disney’s Lady and the Tramp as well as “It’s A Good Day” and “Mañana.”  She’s best known for hits “Why Don’t You Do Right?” “Fever,” “I’m A Woman,” and “Is That All There Is?,” for which she won the GRAMMY® for Best Contemporary Female Vocal Performance. A 13-time GRAMMY® nominee, she received Lifetime Achievement awards from NARAS, ASCAP and The Society of Singers, was inducted into the Songwriter’s Hall of Fame, and earned an Academy Award nomination for Best Supporting Actress in Pete Kelly’s Blues.

During the 1940s, Capitol’s Transcription Library Service produced records exclusively for radio airplay and not commercial sale. From 1946-1949, Peggy Lee, backed mostly by a small jazz group, recorded masters for the Capitol Transcription Library Service. The Capitol Transcriptions 1946-1949, a 72-track collection, features 55 songs making their worldwide digital debut and includes two Peggy Lee compositions, “Don’t Be So Mean To Baby” and “I Don’t Know Enough About You.”

Fever: The Music of Peggy Lee, which originally aired in 2004, has been newly updated for the centennial commemoration. The 60-minute PBS program, which will air in select markets in mid-July and premieres in most areas the week of August 29, explores her life and songs as told in her own words, though vintage interviews and performances. Check local listings for air dates and times.

This year has already seen the release of Ultimate Peggy Lee, a new 22-track career retrospective that features her hits, five songs she co-wrote, as well as the previously unreleased “Try A Little Tenderness,” which makes its world debut 57 years after it was recorded. This set is among three titles offered during the PBS pledge drive.

Also recently released is Peggy Lee Decca Rarities, a 31-song digital-only collection of artistically and commercially successful recordings over her career with Decca Records. Eleven of the featured tracks were co-composed by Lee, among these are seven songs co-written by Lee and Sonny Burke for Disney’s Lady and the Tramp, some of which did not make the final film. Though long associated with Capitol Records, Peggy Lee recorded with Decca for five years (1952-1956).

Born Norma Deloris Egstrom in Jamestown, North Dakota, she was christened Peggy Lee in 1937 by a local North Dakota deejay. A 13-time GRAMMY Award-nominee, Peggy Lee helped redefine what it meant to be a female singer with her captivating voice, which continues to resonate with audiences of all ages. Her compositions and recordings, including “It’s A Good Day,” “I Don’t Know Enough About You” and “I Love Being Here With You,” can be heard today in countless television shows and feature films.

Best known for such songs as “Is That All There Is?,” “Fever,” “Why Don’t You Do Right,” and “I’m A Woman,” which made her a jazz and pop legend, she recorded over 50 albums and amassed over 100 chart entries. She won the GRAMMY® for Best Contemporary Vocal Performance for her 1969 hit “Is That All There Is?” In 1995, she received the GRAMMY’s Lifetime Achievement Award.

Coined “the female Frank Sinatra” by Tony Bennett, Lee did something few of her male counterparts ever attempted: she wrote songs. As one of the foremothers of the singer-songwriter school, Lee ranks among the most successful female singer-songwriters in the annals of American popular music. Over her remarkable seven-decade career, singer, songwriter and composer Peggy Lee wrote over 250 songs and recorded over 1,100 masters.