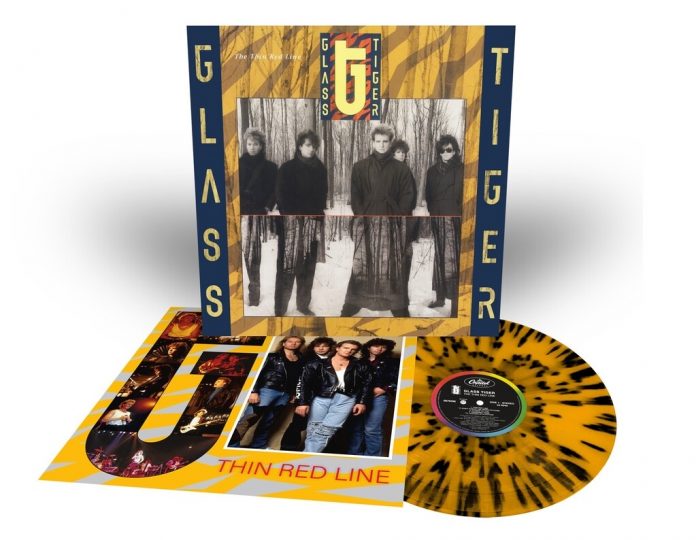 And so it continues….the story of one of Canada’s most enduring and iconic bands, Glass Tiger, roars on. Originally known as, Tokyo, the band formed in Newmarket, Ontario, in 1981 and spent several years cutting it’s teeth in the bar scene of the day. With rapidly growing popularity it didn’t take long for all the major record labels to come courting, culminating in their signing a world-wide recording deal with, Capitol Records, in 1985.

Changing their name to Glass Tiger, their debut album, The Thin Red Line quickly became an unstoppable force, rocketing up the charts to become the fastest selling debut album in Canadian history, spawning no less than 5 hit singles. Leading the charge was the now-and-forever iconic, Don’t Forget Me (When I’m Gone), a song that is forever etched into the very fabric of popular music’s history.

On the upcoming reissue, Alan Frew says: “Re-mastering and re-issuing The Thin Red Line, is not only a testament to the enduring legacy of an album, it’s also a testament to the enduring legacy of a band and it’s fans. You are the best in the world and you share with us your love, not only of GLASS TIGER but also a love of one of the greatest decades in the history of music.”

Originally released in 1986, Glass Tiger’s debut album The Thin Red Line has become a quintessentially Canadian rock album. The lead single “Don’t Forget Me (When I’m Gone),” which features backup vocals by Bryan Adams, peaked at #1 on the Canadian charts and at #2 on the US charts. The album’s successful follow-up single “Someday,” went on to reach #7 in the US and #14 in Canada. Both singles won ‘Single of the Year’ at the 1986 and ‘87 JUNO Awards, marking the first time in the award’s history that the accolade was won by the same artist in two consecutive years, for singles from the same album. In 1987, the band dominated the Rock Express Magazine reader’s poll, winning ‘Top Canadian Group,’ ‘Top Canadian Album’ for The Thin Red Line, and ‘Top Canadian Single’ for “Don’t Forget Me (When I’m Gone).”