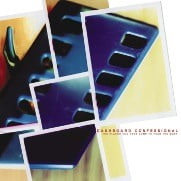 Dashboard Confessional continue this year’s DC20 20th anniversary celebration by announcing The Early Days, a vinyl reissue series spotlighting the albums and EPs that defined the band’s formative years, and cemented singer/songwriter Chris Carrabba as one of the most vital voices that would reshape the musical landscape for years to come. The series kicks off with the first-ever vinyl pressing of 2001’s The Places You Have Come To Fear The Most, set for release on July 31st, 2020. A long-awaited vinyl re-release of 2000’s The Swiss Army Romance as well as a first-time pressing of 2002’s MTV Unplugged 2.0 will also follow later this year, and all will be available in multiple collectible, limited edition variants in addition to a non-limited edition run of standard black vinyl.

Two of the limited edition color vinyl versions of Places, in addition to black vinyl, are now available for pre-order HERE. The splatter color vinyl can be purchased only via the DashboardConfessional.com online store, while the cloudy orange and clear vinyl is available only via independent record stores, a community that has long-supported Dashboard Confessional. A yellow and blue vinyl, limited to only 1,000 copies, can be found exclusively at VinylMePlease.com, beginning tomorrow, July 10th.

The band has also announced an upcoming partnership with Mondo to release three EPs for the very first time on vinyl this year: 2001’s So Impossible, 2002’s Summers Kiss, and a newly created Spider-Man 2 EP. Mondo is an expanding enterprise with a passionate love of film, art, music and pop culture, best known for creating limited-edition posters, vinyl soundtracks, premium collectibles and games. Based in Austin, Texas, the team collaborates with an international network of talented artists and creators to produce the highest quality products inspired by licensed properties and original IPs. More details about the limited edition EPs will be announced later this year.

This year’s 20th celebration also included the release of Dashboard Confessional’s first-ever career-spanning compilation, The Best Ones Of The Best Ones, and their own installment in the Spotify Singles series (a reimagining of their breakthrough hit “Screaming Infidelities” and a cover of Post Malone’s “Circles”). After having to cancel the remainder of a predominantly sold-out tour of intimate rooms across the U.S. and Canada, Carrabba helmed a series of livestreams in late April. Most notably was the career-spanning charity show ‘As Social As I Get Now,’ which raised over $172,000 for the Music Health Alliance, a Nashville, Tennessee-based organization partnered with the Spotify COVID-19 Music Relief project, which matched donations dollar-for-dollar.