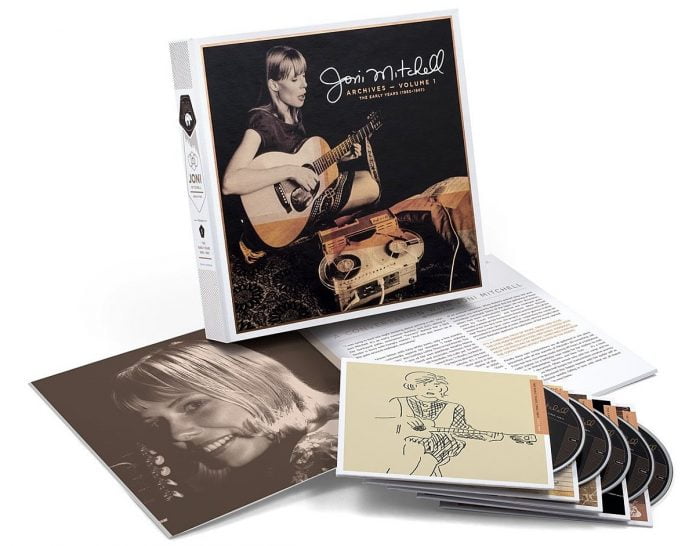 Since her debut album arrived in 1968, Joni Mitchell’s songs have been embraced across generations, inspired multitudes of artists around the world, and earned every conceivable accolade. She is now opening her vault for the first time to create the Joni Mitchell Archives, a new series of boxed set releases that will span the next several years, featuring deep dives in to unreleased content from different eras of her storied career. Mitchell has been intimately involved in producing the archive series, lending her vision and personal touch to every element of the project.

The series debuts on October 30 with JONI MITCHELL ARCHIVES VOL. 1: THE EARLY YEARS (1963-1967), which features nearly six hours of unreleased home, live, and radio recordings that flow chronologically to paint a rich portrait of Mitchell’s rapid growth as a performer and songwriter during the period leading up to her debut album. This treasure trove of unheard audio includes 29 original Mitchell compositions that have never been released before with her vocals. The collection will be available as a deluxe 5-CD set as well as digitally.

The collection begins in 1963 with her earliest-known recording as a 19-year-old Mitchell performs at CFQC AM, a radio station in her hometown of Saskatoon, Saskatchewan. The first song from this set, Mitchell’s take on “House Of The Rising Sun,” is available today as a digital single. The box culminates with a stirring, three-set 1967 nightclub performance recorded at the Canterbury House in Ann Arbor, Michigan.

Both of these performances will be available separately on 180-gram vinyl on October 30. The first, EARLY JONI – 1963 will be released as a single LP on 180-gram vinyl. Like several of Mitchell’s past albums, the cover for EARLY JONI features a self-portrait and marks her first new art in many years. The other, LIVE AT CANTERBURY HOUSE – 1967, is a 3-LP set and includes Mitchell’s entire three-set performance from October 27, 1967. Production of this 180-gram vinyl set will be limited to 10,000 copies.

To coincide with the JONI MITCHELL ARCHIVE series, Mitchell has launched an official website (www.jonimitchell.com), social media properties (Facebook, Instagram, Twitter), and YouTube channel. These platforms will be sources for news, photos, videos and other historical content as well as exclusive album release, merchandise, and more. Limited edition, colored vinyl versions of both EARLY JONI (1,500 copies on 180-gram clear vinyl) and LIVE AT CANTERBURY HOUSE – 1967 (1,500 copies on 180-gram white vinyl) are available for pre-order now exclusively at store.jonimitchell.com. Any music product purchased on the official Joni Mitchell store comes with an exclusive 7”x7” art print honoring the launch of the archive series.

Through a wealth of unreleased live performances, home recordings, and radio broadcasts, ARCHIVES VOL. 1 brings into focus the period when Mitchell was finding her voice artistically. It shows her moving away from the folk standards of her early days (“John Hardy” and “House Of The Rising Sun”) and starting to write and sing her own songs (“Day After Day” and “Urge For Going.”)

ARCHIVES VOL. 1 reveals just how prolific a songwriter Mitchell was at the time. In addition to early versions of songs that would appear on Song To A Seagull (“Michael From Mountains” and “I Had A King”), the set also features songs destined for later albums: “Chelsea Morning”  “Both Sides Now” (Clouds, 1969); “The Circle Game” (Ladies of the Canyon, 1970); and “Little Green” (Blue, 1971).

More than a just historic document, these recordings crackle with energy thanks to a vibrant and enchanting Mitchell. On many, you can hear her tuning her guitar and telling a story about the song before playing it. That includes her rare 1967 cover of Neil Young’s “Sugar Mountain,” a song she says inspired her to write “The Circle Game.”

The 5-CD collection includes a 40-page booklet that features many unseen photos from Mitchell’s personal collection as well as new liner notes featuring conversations between writer/filmmaker Cameron Crowe and Mitchell, who recently spent a couple of Sunday afternoons together discussing her archives. Crowe will continue to provide liners for future releases in the series.

Liner notes for both vinyl releases were each composed by people who were in the room when the original performances were recorded. Barry Bowman was working as a DJ at radio station CFQC in 1963 and provides the notes for EARLY JONI. Bob Franke, who was covering Mitchell’s show at Canterbury House for the Michigan Daily while also moonlighting as a doorman at the club, pens the liners for LIVE AT CANTERBURY HOUSE. His original review for the Michigan Daily is also included.

Looking back, Mitchell reflects on her early label of “folk singer”: “The early stuff, I shouldn’t be such a snob against it. A lot of these songs, I just lost them. They fell away. They only exist in these recordings. For so long I rebelled against the term, ‘I was never a folk-singer.’ I would get pissed off if they put that label on me. I didn’t think it was a good description of what I was. And then I listened and…it was beautiful. It made me forgive my beginnings. And I had this realization…I was a folk singer!”

“A Record Of My Changes” – Michael’s Birthday Tape: North Carolina (May 1967)

Side One: First Set