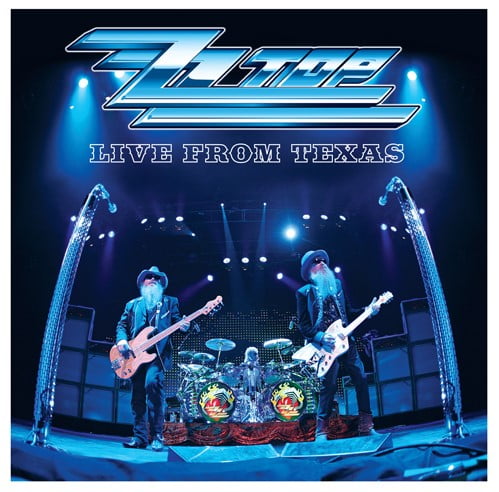 On September 25, Eagle Rock Entertainment is proud to release ZZ Top: Live From Texas — a reissue of the 2 LP set, originally released in 2010. Now, a decade later, this classic concert will be available as a special limited run of 1,000 copies, pressed on white vinyl.

ZZ Top: Live From Texas features audio from the certified double-platinum 2008 Live From Texas DVD / Blu-ray / CD release. Additionally, “Heard It On The X” is included as a vinyl-exclusive track, an extra bonus to the original CD release.

Live From Texas captures ZZ Top performing a stacked setlist of their celebrated songs, including tracks from their 10x platinum 1983 masterpiece Eliminator. “Tush,” “La Grange,” “Legs,” “Cheap Sunglasses,” “Gimme All Your Lovin’”, “Sharp Dressed Man”…these songs go beyond the title of “hits” — they are classic anthems, woven into the fabric of both Rock and Roll and American culture. Recorded in Texas in 2007, this 2 LP sonically showcases Billy F Gibbons, Dusty Hill, and Frank Beard delivering their songs with the sound, spirit, and swagger, establishing them as international superstars.

Five decades following their inception, the “Little Ol’ Band From Texas” continues to inspire and thrill fans worldwide. One of the most instantly recognizable music outfits in history, their rhythm-driven, big brand of blues-rock and distinct image made them inimitable entertainers and cemented their legacy in the Rock and Roll zeitgeist. ZZ Top: Live From Texas proves that prowess in spades.

Side A:
A1: Got Me Under Pressure
A2: Waitin’ For The Bus
A3: Jesus Just Left Chicago
A4: I’m Bad, I’m Nationwide
A5: Cheap Sunglasses