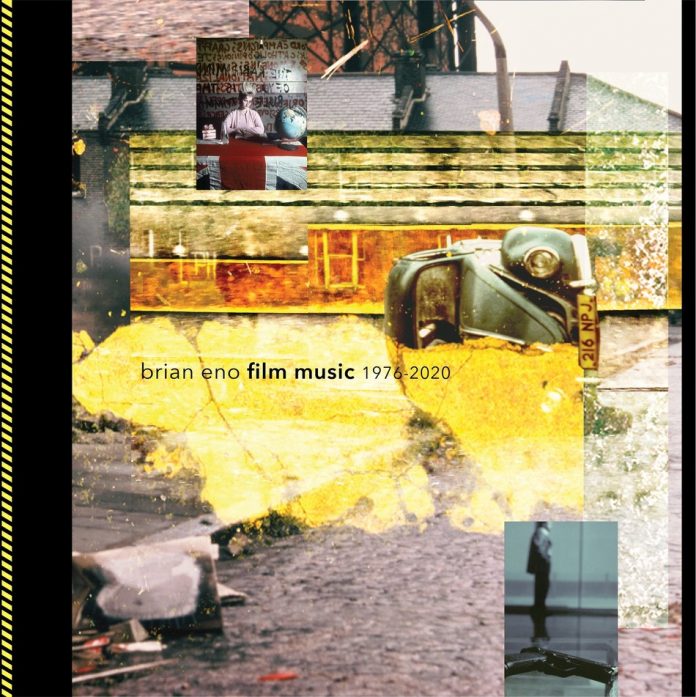 Brian Eno releases Film Music 1976 – 2020 – his first-ever collection of music from his film and television soundtrack oeuvre digitally on November 13, 2020, and on 2LP and 1CD on January 22, 2021. Spanning five decades, this release features classic Eno compositions and includes some lesser-known gems and seven previously unreleased tracks.

Eno’s long-standing affair with film goes all the way back to 1970 with his soundtrack to Malcolm Le Grice’s short experimental film Berlin Horse. In 1976 he followed this with Sebastiane and a long-forgotten Greek b-horror film, Land Of The Minotaur AKA The Devil’s Men. This led to an unstoppable momentum largely initiated by the release of Music For Films. Early classic Eno film moments include “Prophecy Theme” from David Lynch’s Dune, “From The Beginning” from Dario Argento’s Opera, “Force Marker” and “Late Evening In Jersey” from Michael Mann’s Heat, “Under” from Ralph Bakshi’s Cool World and his moving cover of William Bell’s soul classic, “You Don’t Miss Your Water,” in Jonathan Demme’s Married to The Mob.

His 1978 studio album, Music For Films was a loose compilation of material recorded between 1975 ~ 1978. It was intended as a conceptual soundtrack for imaginary films, and only the last track, “Final Sunset” was written for an actual film. It proved to be a fruitful project with nearly every piece on the album going on to be used in future films, including several of Derek Jarman’s, the remake of Jean-Luc Goddard’s Breathless, John Woo’s A Better Tomorrow, Rock ‘n’ Roll High School and Todd Hayes’ Safe.

Eno again explored this approach with U2 as Passengers on their collaboration album, Original Soundtracks 1. Four of the tracks from the album were used in films prior to release: “Beach Sequence” and “Your Blue Room” in Michelangelo Antonioni’s Beyond the Clouds, “Miss Sarajevo” in an eponymous documentary about a beauty pageant held in the midst of besieged ’93 Sarajevo, and “One Minute Warning” in Mamoru Oshii’s Japanese animation classic, Ghost in the Shell. Another track, “Always Forever Now” later appeared in Heat.

In the mid-seventies, Eno began a rich and rewarding collaboration with British filmmaker Derek Jarman, who initially commissioned Eno to record “Final Sunset” for the closing scene to his first feature film, Sebastiane. The collaboration continued all the way through until Jarman’s untimely death in 1994. Including the several tracks in Sebastiane, this collaboration resulted in Eno’s music in four of Jarman’s films, including “Still Water” and “Dover Beach” in Jubilee, “Blue” and the entire score of the autobiographical Glitterbug – his final film.

“An Ending (Ascent)” and “Deep Blue Day” are taken from Apollo: Atmosphere & Soundtracks, Eno’s collaboration with his brother Roger and Daniel Lanois. The music was originally written for Al Reinert’s landmark documentary of the Apollo moon landing, For All Mankind, although since then, “”An Ending (Ascent)” has taken on a life of its own and is now remembered just as much from Steven Soderbergh’s Traffic, Danny Boyle’s 28 Days Later and Miguel Arteta’s Beatriz at Dinner. It even made an appearance in the 2012 London Olympics opening ceremony. And then there’s “Deep Blue Day,” which will forever be identified with Ewan McGregor’s legendary toilet dive in Trainspotting.

Aside from Glitterbug and For All Mankind, Eno has also provided complete scores for a number of other films including Peter Jackson’s The Lovely Bones, and more recently, Henrique Goldman’s atmospheric Brazilian serial killer biopic, O Nome da Morte AKA A Man Called Death, Slavoj Žižek’s mind-boggling documentary, The Pervert’s Guide To Cinema, Gary Hustwit’s spotlight on pioneering industrial designer Dieters Rams, Rams, and most recently a documentary film on close long-time friend and associate, Stewart Brand, We Are As Gods, which will have its public premiere in early 2021.

Eno has had hundreds of pieces of his music used in films, documentaries, and television programs, including more than 20 complete scores for some of the best-known directors in the world. Film Music 1976 ~ 2020 is a long-awaited album that finally brings together seventeen of his most recognizable film and television compositions, a perfect introduction to this enormous body of work.