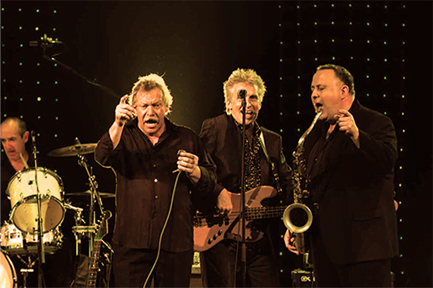 After months of waiting to hit the road again due to the pandemic, The Legendary Downchild Blues Band are bring LIVE BLUES back to their fans with a REAL LIVE PERFORMANCE in front of a LIVE AUDIENCE of 50 lucky fans at the Empire Theatre in Belleville, ON on Friday, October 16, 2020 at 8:00 Pm (ET). The show will be STREAMED WORLDWIDE to fans around the globe in real time, with no overdubs or tape delays, as a live ONE-DAY-ONLY pay per view concert to celebrate the international release of their acclaimed new 50th Anniversary album.

Downchild will be joined by some special guests to be announced shortly, for this their final live performance of 2020.

Downchild will donate $1.00 for every ticket sold to the Jane Vasey Memorial Fund at her Alma Mater, Brandon University in Brandon, Manitoba, in support budding keyboard students.

Downchild’s 50th Anniversary Live At The Toronto Jazz Festival release is getting rave reviews from Australia to Holland, the UK., Canada and the U.S., where the album made its debut at # 11 on the respected Living Blues Charts in August.

The band is releasing their first vinyl album in over 30 years when Live At The Toronto Jazz Festival hits record stores across Canada alongside the CD, through Diesel Management Productions/Fontana North on October 16, 2020, to coincide with the international release date.

2018 Juno Award winners, Downchild, include some of the most well-respected musicians in the country, who have performed together for over 25 years. Guitarist, harmonica player, leader and co-founder of the band, DONNIE “Mr. Downchild” WALSH, lead singer and harmonica player CHUCK JACKSON, PAT CAREY on tenor sax, MIKE FITZPATRICK on drums, GARY KENDALL on bass, and former American super-group rocker MICHAEL FONFARA (of Rhinoceros/Lou Reed fame) on keyboards.