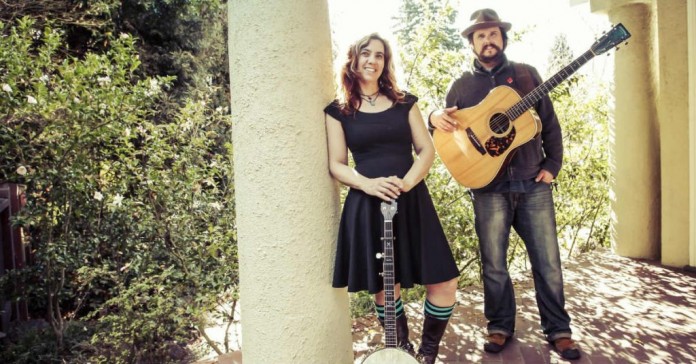 Canadian folk duo The Small Glories touched a nerve with audiences with their  U.S.  debut, ASSINIBOINE & THE RED, an album that celebrates the Canadian Prairies. The Juno award-nominated release was embraced at folk radio and garnered them the 2019 “Artist of the Year” award at the 2019 International Folk Alliance convention. The Small Glories, aka Cara Luft, an original member of the Wailin’ Jennys, and multi-instrumentalist JD Edwards, are sharing a new video with Folk Alley for their modern protest song, “Sing.” The song has long been an audience favorite. Luft describes it as a protest song for our time. “It’s a song to roust us out of our complacency and our indifference, a song to challenge our era of divisiveness and polarization to remind us what ‘it’ is all about, and what it’s not,” she says.

“We’ve been digging deep, to our roots, to honour the folksinger and troubadour’s role in society, to harken back to our family’s heritage of peace, protest and labour movement songs, to tap back into our spiritual upbringing that taught us that all humans are valued, loved and important,” Luft tells Folk Alley. “We want, and need, to sing about the things that matter, to speak out through song, to offer what we can to our world. Now is the time.”

Luft and Edwards’ onstage chemistry and humor complements their energetic live performances and buoyant, Americana-inflected folk songs; their exuberant harmonies bring to mind such duos as The Civil Wars and Shovels & Rope, but with a Northern spin. NPR wrote, “Luft is a Wailin’ Jennys alum whose work on the clawhammer banjo is to die for, while Edwards’ guitar and vocal harmonies deepen and enrich the duo’s sound.”

“We’re folk singers, we try to write stuff that people can relate to,” says Edwards, whose looming stage presence and penetrating eyes find him the yin to Luft’s petite, snort-laughing yang.

The album’s songs do play out like travelogue of sorts. ASSINIBOINE & THE RED is rich with a sense of place and geography and is bookended by two songs that pay tribute to locales. The opener, “Alberta,” is a love song to Luft’s home province and is “dedicated to anyone who is new to a place and surprises themselves by having their heart stolen by the land.” The raucous closing track, “Winnipeg,” is a spirited celebration of their hometown, “a city full of heart and guts and soul,” Luft says. “It’s a city of many languages and cultures where a big beautiful sun, the great equalizer, shines down on everyone all year long.”