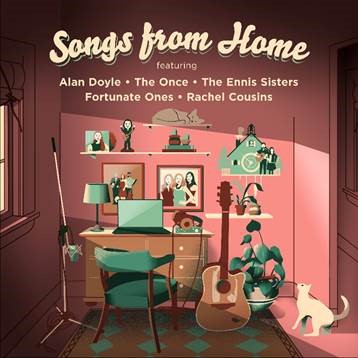 Five of Newfoundland’s most cherished artists braced for the challenge of creating music together during this year’s worldwide health crisis. The result: a six-song EP due out November 13 titled SONGS FROM HOME, – a collection of music from Alan Doyle, The Once, The Ennis Sisters, Fortunate Ones and Rachel Cousins.

The first single, “It’s OK,” features all five artists reimagining a song from Doyle’s EP Rough Side Out, released earlier this year. “It’s OK” perfectly captures the spirit of the time we are living in and the essence of this project, and will be out October 30.

For the first time in many years, Doyle found himself at home, with no live shows on his calendar for the foreseeable future. This was an opportunity he did not want to waste and reached out some of his fellow Newfoundland artists to see if they wanted to record together. They all worked from their own homes, only seeing each other in person during the socially-distant recording session for “It’s OK.”

“It’s really all about making and keeping connections at a time when it was so difficult to be connected,” said Doyle. “It was such a feeling of closeness to be working on something together even though together was what we certainly could not be when this whole thing started.”

Celebrating the release of Songs From Home, Doyle will livestream two of his four upcoming sold out performances from The Public House at YellowBelly Brewery in St. John’s, Newfoundland, on Friday, November 13 and Saturday, November 14 at 7:30 p.m. ET / 8:30 p.m. AT. Accompanied nightly by guitarist Cory Tetford and fiddler Kendel Carson, the livestreams will also feature special guest appearances by Fortunate Ones and Rachel Cousins on Nov. 13 and The Once and The Ennis Sisters on Nov. 14.

Livestream tickets are $20 in advance per night and $25 day of show (including tax and fees) and are available now, exclusively online at https://www.sonicconcerts.com/alan-doyle-livestream.