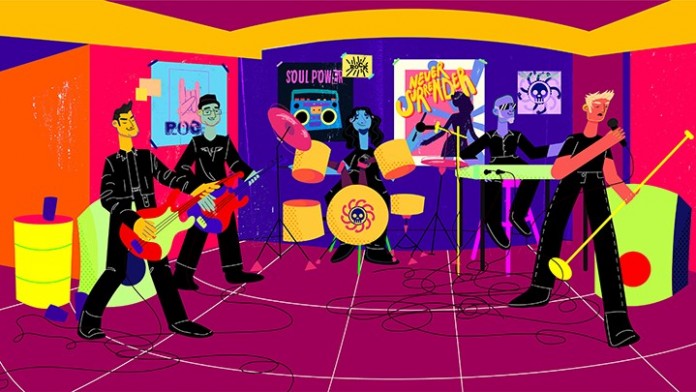 The two-minute, 50 second-spanning rock song came to fruition after frontman Gord Prior decided it was time to address all the emails and social media tags he received from longtime fans “begging” for Blu Bones to either get back together or record something new, at least.

“Most of us never thought of reuniting or doing anything new musically after all of these years,” admitted Gord. “But because of social media, over the past decade, we’ve received so many emails from fans and friends we never knew we had — from all over the world.

Gord continued: “They’ve begged us to do something new for a long time. To reunite somehow. This song, this moment, it just felt right and the timing was perfect for everyone.”

“She’s Got a Way with Love” is heavily reminiscent of the esteemed band’s classic sound with a tasteful twinge of late 1970s-era Cheap Trick and modern-day Alice Cooper — yay for power pop goodness.

The unexpected comeback single is scheduled for a Feb. 14 release and will see the London-based band reunite in a fully-animated music video, created by the dedicated and talented team at Flikli Animation.

After privately seeking out animators through his personal Facebook page, Flikli’s long standing CEO, Rich Adkin, graciously raised his hand to help animate the brand-new tune. It only helped that Rich was a die-hard Blu Bones fan and had been since their beginnings in the early 1990s.

The trippy and dazzling project takes place in a magical world, where the members of Blu Bones seemingly never aged following their disbandment. Additionally, this world allows them to do absolutely anything that their creative imaginations allow.

“She’s Got a Way with Love” was mixed and recorded by the legendary Matty Green at Studio 55 in Los Angeles, California. Matty has not only worked with the likes of Dua Lipa, Ed Sheeran and Coldplay, but Sir Paul McCartney as well.