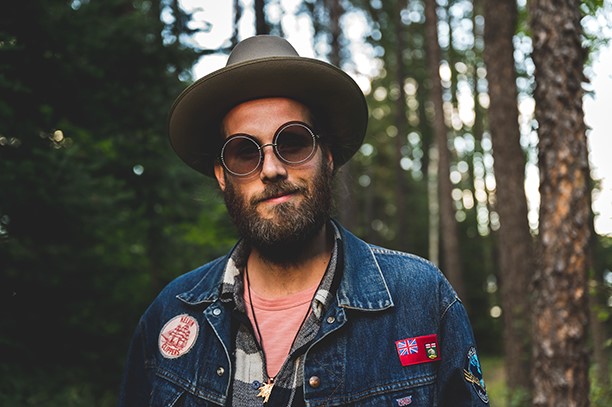 To celebrate, Mister K has recorded a live, acoustic rendition of the song from the comfort of his own backyard in the region of Lorette West. The powerful performance of “Tamarack” features the aspiring musician’s wife Avery on backup vocals and guitar — and their adorable bulldog Luna, for emotional support.

Mister K points out that one of the sonic “easter eggs” found in the new album comes from his little canine companion; every time the word “moon” is sung on In Event of Moon Disaster, Luna rings a bell.

“If you listen hard enough,” he adds.

Overall, In Event of Moon Disaster is described as a musical journey through highs and lows, or “a pendulum swung through the hardship of darker days” (like the song), according to Mister K. Inspired by the ongoing COVID-19 pandemic, it’s ultimately about overcoming adversity, emerging from the darkness and finding the light at the end of the tunnel; or even some sense of hope.

“I knew I wanted to make an album steeped in poignant and vulnerable themes, but I wanted it to also have some pop and sparkle.”

The nine-track, 34 minute-spanning effort is reflective of the works of Neil Young and was written solely by Mister K and recorded at Paintbox Recording Studios in Winnipeg, MB. In terms of the genre and overall style found within In Event of Moon Disaster, Mister K calls himself a “cosmic folk-pop balladeer.”

The artist co-produced the record with the help of engineer Rusty Matyas (The Sheepdogs, Imaginary Cities); on the collaboration process with Rusty, Mister K said that they found inspiration and empowerment together through the strength of healing associated with music and art.

As well as his latest single: the two-minute, 15 second-spanning “Tamarack,” In Event of Moon Disaster features hits like “Hundreds of Dollars,” “Lonely One,” “Game of Hearts” and “Harmony.”