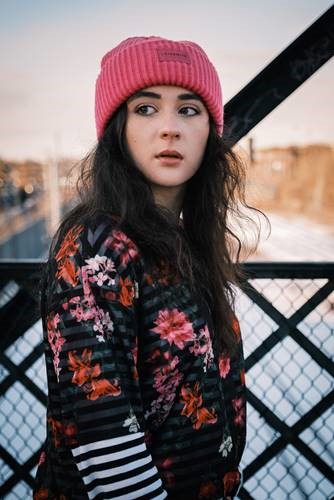 Steadfast throughout, “Battle”’s monochromatic, melancholic masterpiece of a video enveloped audiences into Grey’s world, offering a real-time exploration into what depression looks and feels like for someone in the throes of it.

Given the rapid changes this year to date so far, “Ghost Town” unexpectedly picks up where “Battle” arguably leaves off, as Grey harnesses her unique perspective and dynamic lyricism to observe our quickly-changing world as it wrestles a viral pandemic.

“This song came out two days into quarantine,” Grey says of “Ghost Town.” “Feelings of helplessness, shock, and disbelief overpowered too much of my psyche, and had to come out.

“These are desperate times. We’re watching individuals, towns, cities, and countries so harshly impacted with the unknown, and will continue to do so until the ‘storm’ settles.

“Funnily enough, this is probably the only ‘uplifting’ and ‘unifying’ song I’ve written…” she continues. “The world is in turmoil, and that can’t and should not be ignored. We have to do our part in taking this seriously.”

Just how to do so, Grey sends a simple signal.

“Use your voices,” she says. “Not to delegate or to sway opinions, but to optimize this opportunity to share, connect, support, and heal…

“Don’t hide behind your screens and wait for someone else to make the difference. Find the answers, and feel the feelings.

“May we support each other in this dire time. May we embrace the opportunity to learn, heal and seek answers. Be kind to your neighbours. Be sensible and prudent. Be hopeful.

On her upcoming Disappointed Girl release, she says, “This sound was a turning point” Delyn Grey explains of her forthcoming album, Disappointment Girl. “I wasn’t hesitating to harness feelings deeper than ‘wow that guy is cute, or ouch you hurt me’. I was going through some rough stuff, man, and this EP is the product of my processing”.

On the advice of producer Justin Abedin — who told her to “stop trying and just let it flow” — Grey went soul-searching. She holed up with her thoughts and the music of artists like Emily Haines and Amy Winehouse, and within a short week later, something clicked. “The EP came alive over the four following months. I had ten songs-worth of things to say, but EP tracks are the ones that really stuck,” she explains. “I’ve never been one for ‘bulk songwriting’. If I need to say something, it finds a way out.”

She continues to say, “Battle is me acknowledging that I was happily drowning in my self-deprecation. It filled this twisted void that ran deeper and deeper the more I gave in to it, but there was always this voice that fought against the heaviness. I eventually let it get louder, and I fought. Fighting gave me purpose, and this song granted me control of the uncontrollable.

“I wrote this song in the throws of it all; it helped me process all that was happening, and still happens, up in here,” she says pointing to her head. “Music will never be my mask. It has to be me because it’s all that I have to keep that voice in my head from tearing me apart.”

“I want to make music that’s fearless. I don’t want people to hear it and think I played it safe. I want people to listen to it and go, ‘That was heavy. Didn’t think it would hit me like that.’ The cool thing is that I’ve had 12-year-old Disney-crazed kids and 55-year-old classic rock fans tell me they love it. I think any kind of music fan can find something in my music because it’s truthful. I put everything I have into it, man. It’s the real stuff.”

One such fan comes in the form of multi-Platinum and Gold selling rock star, author, producer, activist and businesswoman Bif Naked. The iconic Canadian known-and-loved ‘Princess of Everything’ and her longtime collaborator, producer and songwriter Peter Karroll, heard Grey’s sound and quickly signed her to their artist and talent management division, Her Royal Majesty’s.

“She is the first artist about whom I felt so strongly,” Bif says of Delyn catching her attention. “Her talent, words, and music move me like a hurricane.

“She is a truly special artist and I am excited to give her as much exposure and encouragement as I can.”