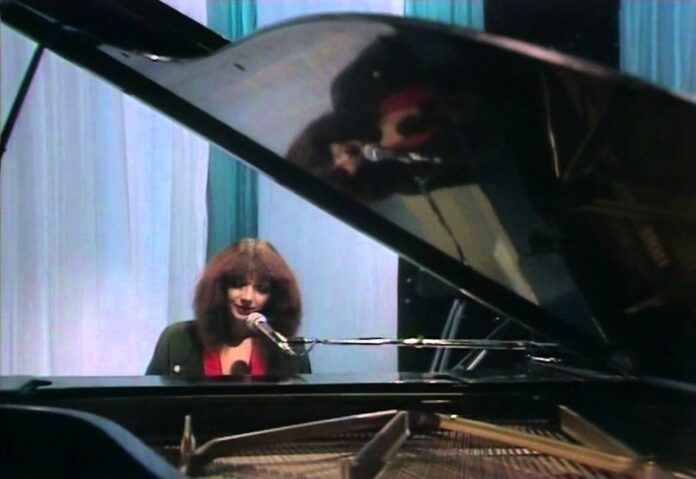 Kate Bush presents her Christmas Special in which she performs songs from her first three albums, along with ”December Will be Magic Again”. Peter Gabriel is her special guest. From Kate Bush News, “‘Kate’ is the official name of a Christmas special that was broadcast on BBC television (UK) on 28 December 1979. It was recorded in October 1979 at the BBC’s Pebble Mill Studios in Birmingham, England with choreography by Anthony Van Laast. Part of the show – the sequence for The Wedding List – had been recorded at South London’s Nunhead cemetery, a 19th-century Gothic cemetery with lots of imposing monuments to eminent citizens of that time. The special was a mixture of pre-filmed sequences, dramatic in-studio set-pieces and a handful of straight performances behind the piano.”

Song List:
Violin
Gymnopédie No. 1
Symphony In Blue
Them Heavy People
The Angel Gabriel (with Paddy Bush and Glenys Groves)
Here Comes The Flood (Peter Gabriel)
Ran Tan Waltz
December Will Be Magic Again
The Wedding List
Another Day (with Peter Gabriel)
Egypt
The Man With The Child In His Eyes
Don’t Push Your Foot On The Heartbreak